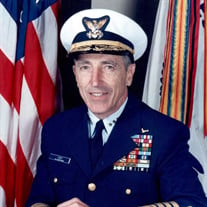 Paul Alexander Yost, Jr., was born in Philadelphia, PA, on January 3, 1929, and slipped peacefully into the eternities on February 9, 2022, just 46 days after his beloved bride, Janice Kay Worth, died on Christmas Day 2021. Paul was the oldest... View Obituary & Service Information

The family of Adm. Paul Alexander Yost Jr. created this Life Tributes page to make it easy to share your memories.

Send flowers to the Yost family.