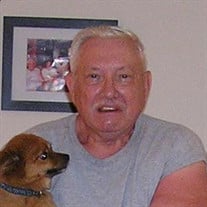 Paul A. Weisner Paul A. Weisner, 79, Manassas, Va., passed away at home December 2, 2021, under the care of his wife, Capital Caring Health and Hospice, and Lifeline Homecare. He had been in declining health for several years. Paul will be forever missed by the love of his life, Myra (Maxwell) Weisner. They met in 1961 and married February 17, 1962 at the K.I. Sawyer AFB Chapel in Michigan’s Upper Peninsula in the middle of a heavy snow storm. Paul served in the U.S. Air Force for 24 years. During his service, the family lived in several locations throughout the United States, the favorite being eight years assigned to Hickam Air Force Base, Hawaii, where the family vacationed on the neighboring Hawaiian Islands. His duties also took him throughout the south Pacific. He served thirteen months in Southeast Asia during the Vietnam conflict. After retirement he was employed by a major Department of Defense Contractor as senior electronics design engineer until he migrated from a stress filled position to the construction industry to be able to spend more time outdoors. Paul is survived by his wife; daughter Lorie Norman, Texas; grandchildren Natalie (Nathan) Trotter, Patrick (Molly) Ward of Texas, and Jonathan (Anna) Weisner, US Army, Tennessee; five great grandsons, Dylan, Wyatt and Zane Turner, Connor Ward and Hunter Weisner; sister, Judy (Paul) Solo, South Carolina; numerous nieces and nephews, and fur baby, Bandit. He was preceded in death by his son, Steven Weisner on December 20, 2020; daughter-in-law Kim, in November 2019; sisters, Rose and Catherine; brothers James, Glenn T. Jr. and Robert; and parents Glenn T Weisner Sr and Pearl E (Hunter) Weisner. He was born in Latrobe, Pa. on April 22, 1942, graduated high school in 1960 and immediately enlisted in the U.S. Air Force (1960 – 1984). He was a member of the American Legion. Paul was a true lover of nature, enjoying the outdoors, gardening, and watching the deer, fox, birds, squirrels and other animals that regularly pass through their property. At Paul’s request, cremation has been afforded, with private memorial services to be held Friday, December 10, 2021. Visitation from 1:00-2:00 pm, with services at 2:00 pm. Arrangements are in the care of the Pierce Funeral Home, Manassas, Va.

Paul A. Weisner Paul A. Weisner, 79, Manassas, Va., passed away at home December 2, 2021, under the care of his wife, Capital Caring Health and Hospice, and Lifeline Homecare. He had been in declining health for several years. Paul will... View Obituary & Service Information

The family of Paul A. Weisner created this Life Tributes page to make it easy to share your memories.

Send flowers to the Weisner family.