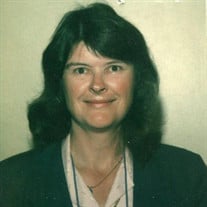 Patricia Ann Townsend (nee Long), age 79, died peacefully at Novant Haymarket Medical Center on June 17, 2021. “Patt” to friends, “Patti” to close friends and family, was an outstanding American who spent her life in service to her country, her family, her friends, and to her hobbies: reading, gardening, painting, collecting curios, gravy boats, coins, and jewelry. Patricia was born in Lewistown, Pennsylvania, on April 23, 1942, to the late Frank Leroy “Dingie” Long and the late Rhoda Maunder Long. She was also predeceased by her younger brother, Clarence William Long in 2007. Patricia graduated from Lewiston High School, Lewiston, Pennsylvania, in 1960. She then moved to Washington, D.C., where she began her career with the United States Government. After many assignments, including European, Asian, and North African tours of duty, Patricia moved back to Pennsylvania. She then spent two years at the Pennsylvania State University attending school and working on another government assignment. Patt moved back to Washington, D.C. where she completed a few more assignments, most of them overseas. Then, in 1966, she moved to Virginia and began working with the United States Air Force (ASAF). She spent 31 years with the Air Force, most of them in the Pentagon. She continued her “Penn State” education through USAF sponsored correspondence courses and received degrees in creative writing, contract English, and speechwriting. She attended an in-house acquisition school and received a degree in USAF Contract and Acquisition Policy. She wrote one Headquarters, USAF, Regulation, and many articles on USAF Acquisition Policy. These articles were published in-house in a government newsletter called, “The Blue Bulletin.” After a total of 37 years of government service, Patricia retired in 1997 from HQ USAF, Systems Acquisition (SAF/AQ), where she worked at acquiring heavy equipment for the Air Force. In 2000, she became very ill and almost died of incurable, inoperable, stage 3B, non-small cell lung cancer. She was given three months to live. The cancer caused her main artery in her left leg to fail and as a result lost that leg in the process. After 19 chemotherapies and 35 radiations, she began to recover. She became completely well by 2004. She continued her hobbies, particularly Agatha Christie mysteries, by procuring every book or film ever made that was based on an Agatha Christie novel. She also continued gardening, painting, collecting brooches, etc., and then in 2007 she took up gambling on slot machines as a hobby mostly at Charles Town, West Virginia, winning just about a little less than she lost. By 2011, she began to be bored of gambling, so she gave that hobby up. Patricia is survived by her husband, Howard Douglas Johnson. She is also survived by her son Frank Randolph Stuck and his wife, Diana, of Manassas, Virginia; two grandchildren, Brandon Scott and Douglas James; four stepchildren: Howard, Jr., Brian, David, Daisha; and eight step grandchildren: Ciera, Brian Jr., Kira, Tamara, Briana, Darius, David Jr. and Diane. She is also survived by one sister, Mary Gwendolyn (Long) Fosselman of Lewiston, Pennsylvania, her husband James, their two children Andrea Lynn and Jill Elizabeth and her five grandchildren, Elena, Justin, Austin, Andrew, and Bailey. A graveside service will be held on Wednesday, June 23, 2021, at 10:00 AM at Stonewall Memory Gardens, 12004 Lee Highway, Manassas, VA 20109. There will be no reception. Flowers are nice. Patricia’s favorite flowers were carnations; however, contributions to animal charities would also be nice. Goodbye everybody. [Written by Patricia herself.]

The family of PATRICIA ANN TOWNSEND created this Life Tributes page to make it easy to share your memories.

Send flowers to the TOWNSEND family.