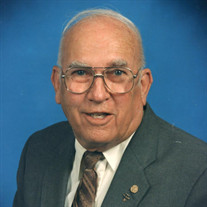 Orval “Marshall” Amos Marshall, age 94, of Manassas, VA died on Sunday, March 20, 2022, at Novant Health UVA Prince William Medical Center in Manassas, VA. Mr. Marshall was born on January 24, 1928, in Sylvia, Kansas. He was one of seven boys born to Raymond and Gertrude Marshall. He enlisted in the Army in 1946, specializing in the field of Military Photography. He was stationed at the American Embassy in Tokyo, Japan where he served as General MacArthur’s personal assistant. He was one of Gen. MacArthur’s elite Honor Guards and received a WWII Victory Medal. Following his Army discharge, he worked at the Pentagon, Department of the Army, as an Electrical Technician where he retired at the age of 55. He then took on the job as manager at the Manassas Drive In for fifteen years, followed by a job with Radio Shack. Mr. Marshall was a founding member of the Manassas Church of Christ, where he attended for more than 65 years, He was both a member of the Art Guild and Members of the Past. He was a person with so many talents and so many stories of places he had been and of things he has done. A man with a big heart and smile to match. He was preceded in death by his first wife of 60 years, Josie June Sheets, and by his brothers Luther, Ernest, Clifford, Raymond, and Floyd. Survivors include his and Josie’s son Richard and wife Pam; two granddaughters, April and Sarah Jo; and four great grandchildren, Elijah, Angel, Jaya, and Caden; as well as one brother, Allen Marshall. Additionally, he is survived by his second wife of nine years, Peggy Weber, of Aldie, VA; and stepchildren, Wanda Westmoreland, Shelby Montgomery, Dennis Weber, Steven Weber, and Jerry Weber; step grandchildren: Michael, Kelly, Dustin, Maya, Kira, Jeyda; and five step great grandchildren. The family will receive friends from 11:00 AM-12:00 PM for a viewing, followed by funeral services at 12:00 Noon on Thursday, March 31, 2022. Both will be held at the Manassas Church of Christ, 8110 Signal Hill Rd., Manassas VA 20111, with Barry Bryson, Minister, officiating. Internment will follow at Stonewall Memory Gardens, 12004 Lee Hwy., Manassas, VA 20109. Expressions of Sympathy in loving memory of Orval Marshall, may take the form of flowers or contributions to the Manassas Church of Christ, 8119 Signal Hill Rd., Manassas, VA 20111.

The family of Orval Amos Marshall created this Life Tributes page to make it easy to share your memories.

Send flowers to the Marshall family.