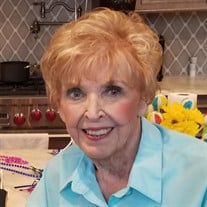 Nell Roselaine Murphy of Gainesville, VA passed away at the age of 90 on April 4, 2021. She was born on August 16, 1930 in Hopewell, VA a daughter of the late Marvin T. and Nellie M. Broyhill. She moved to Arlington Virginia in her youth, where she lived the majority of her adult life and raised her four children. Later in life, she moved to Gainesville, VA where she lived for 20 years. Nell attended The Warrenton Country School where she boarded for three years before graduating in 1948. She attended Mount Vernon College as well as American University in Washington, D.C. One of Nell’s Junior High School friends gave her the nickname, “Cookie”, which all her friends called her for the rest of her life. With the birth of her oldest grandson, she acquired a new name, “Kee Coo”! The name was much loved by Nell, and she gladly used it as her e-mail address and personalized license plate. She became simply Kee Coo to her grandchildren and many members of her family. Nell spent her earlier years selling real estate in her family’s building business and raising her family. She was a part of several organizations to include The Potomac’s Women’s Club, which her mother founded, The Capitol Speaker’s Club, volunteering for The Red Cross, and volunteering alongside her sister for the Prince William Hospital Auxiliary. She enjoyed playing bridge, spending time with family at her beach home, crocheting beautiful blankets and was a voracious reader. Nell was a prolific poet. On special occasions she would bless the honoree with a poem she composed and personalized for the occasion and the individual. Family members and friends looked forward with great anticipation to her latest creation. Nell loved the Constitution of the United States and the liberties and promises provided to the citizens of our great country. She was an enthusiastic supporter of military veterans and the individuals serving in maintaining the safety of our communities. Throughout her life, her focus never left service and devotion to her Lord and Savior, Jesus Christ. She was a charter member of Memorial Baptist Church, co-founded by her parents in 1947. Later in life she attended McLean Bible (Prince William County campus). After being unable to attend church in person for the last year due to the pandemic, her desire was to start attending in person. She was able to attend for the first time on Easter Sunday and the sermon she heard taught that our lives will begin once we leave this earthly abode. Although we all mourn her departure from our presence, we rejoice that she is now united with God in her permanent home. Nell was preceded in death by her husband, Joseph P. Murphy, and three older brothers, Marvin, Joel and Herbert. She is survived by her sister, best friend Vivian Joy Price; her four children, John Murphy (Lynne), Joel Murphy (Xiaoshi), Lorena Van Hulle (Larry), and Seana Reece (Rick); eleven grandchildren, four great grandchildren, and numerous nephews and nieces. There will be a celebration of life on Saturday April 10th at 11:00 AM at the Prince William County campus of McLean Bible Church. The graveside service will follow at Columbia Gardens Cemetery in Arlington, VA. Due to Covid restrictions, the reception will be held later in the afternoon and limited to the family.

Nell Roselaine Murphy of Gainesville, VA passed away at the age of 90 on April 4, 2021. She was born on August 16, 1930 in Hopewell, VA a daughter of the late Marvin T. and Nellie M. Broyhill. She moved to Arlington Virginia in her youth, where... View Obituary & Service Information

The family of Nell Roselaine Murphy created this Life Tributes page to make it easy to share your memories.

Nell Roselaine Murphy of Gainesville, VA passed away at the age...

Send flowers to the Murphy family.