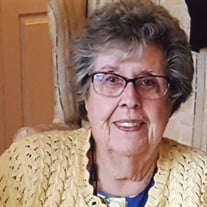 Nancy Lou Smith Flynn, a resident of the Manassas area since 1965, passed away on Thursday, November 11, 2021, at Lake Manassas Health and Rehab, with family by her side. She was born on August 31, 1929 in Wilmington Delaware, the oldest of five children. Although the family moved to Kenmore, New York for a period of time, they returned to Wilmington where she attended and graduated from PS Dupont High School. Active in school musicals and plays from an early age, she pursued a theater arts and music degree at Marietta College in Marietta Ohio. While in college she performed in summer stock productions, operettas and radio shows. Nancy later met and married Bill Flynn, from LaCrosse, Wisconsin. Bill’s career in the Air Force and Civil Service allowed them to travel, live in Omaha, Nebraska and Madrid, Spain before moving to Falls Church, Virginia and ultimately Manassas. In the 1960’s, she began a second career as a teacher for Prince William County. She was a natural teacher. She loved teaching penmanship, reading and history, all while including an artistic interest to engage children. She did not like computers, and as they made their way into the classroom, she made her way out. She continued with her art, painting beautiful ceramic figures, and creating exquisite quilling pieces. She also indulged her love of baking a wide variety of yummy baked goods, especially home-made biscotti. She was a kind and caring person who was a joy to be around. She was predeceased by her husband Bill who died in 1993, her parents, her granddaughter Jessica Lee, her sister Janet and brother Geoff. She is survived by her three children, Kevin Flynn and his wife Lori of Woodland Hills, CA, Juliann Flynn of Winchester, VA and Pamela Trapp and her husband Peter of Bristow, VA. She is also survived by her brother Craig (Charlotte) of Lancaster, PA, her brother Dana (Karen) of Albuquerque, New Mexico, her sister-in law Rose Ann of Zephyrhills, Florida and several nieces, nephews and great nephews. In lieu of flowers the family ask that a donation in her name be made to either your favorite charity or to Trinity Episcopal Food Ministry at Trinity Episcopal. Masks are required for the funeral and visitation per the family request.

Nancy Lou Smith Flynn, a resident of the Manassas area since 1965, passed away on Thursday, November 11, 2021, at Lake Manassas Health and Rehab, with family by her side. She was born on August 31, 1929 in Wilmington Delaware, the oldest of... View Obituary & Service Information

The family of Nancy S. Flynn created this Life Tributes page to make it easy to share your memories.

Nancy Lou Smith Flynn, a resident of the Manassas area since...

Send flowers to the Flynn family.