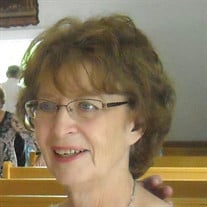 Myra Lou Pauley [Perry], 84, of Tannersville, VA and formerly of Manassas, passed away peacefully in the early morning hours of December 29, 2021 at the home of her daughter in Warrenton, VA. Myra was born on June 23, 1937 in Stone, KY to James and Hazel Perry. By 16 she was living in Athens, WV when she met Billy J. Pauley at the “Turn Hole” in the road near Bent Mountain. As an 18 year old, the country girl left her home and traveled to New Jersey to marry Bill on January 3, 1956. They had 2 children while living in New Jersey: William Robert and Lora Lynn. Being a southern girl and not being too fond of New Jersey, Bill and Myra moved to Manassas, VA in 1967. They added two more children: Stephen Jackson and Jennifer Clare. Myra was a woman of many talents. She was a wonderful cook, seamstress, and gardener. In 1977 she bought a thrift shop along Rt. 234 in Manassas and became a successful business owner. She closed the shop and retired in 2002 after 25 years in business. Myra was a Christian and attended New Hope Christian Church in Manassas where she taught the Little Lambs class for many years. When in Tannersville, she faithfully attended Tannersville Church of Christ. Bill and Myra bought her family’s homestead in Tannersville and refurbished the 1880s cabin and the 1910s farmhouse and barn. The property bought her full circle. She loved Little Valley and all of the friends and relatives that visited to reconnect and refresh. It is there, in the family cemetery, that Myra will be laid to rest next to her beloved husband Bill on their 66th wedding anniversary. Myra is survived by her four children: Bobby Pauley [Debby], Lora Pando [Oscar], Stephen Pauley, and Jennifer de Franco [Fabiano]; her three siblings Anna Kestner, Charles Perry, and Linda Berkoff; her ten grandchildren Justin, Jessamyn, Eric, Luke, Trevor, Alyssa, Brianna, Myra Clare, Vanessa, and Weston; and seven great grandchildren Avery, Jackson, Alister, Deacon, Liberty, Annie and Harrow. Myra was proceeded in death by her parents, James and Hazel Perry, her brothers Daniel Myers, Absolom Perry, and David Perry, her sister Nancy Miles, and grandsons Kyle Heflin and Ian Heflin. Expressions of sympathy can take the form of flowers or by making a donation to the Alzheimer’s Association at ALZ.org in memory of Myra L. Pauley.

Myra Lou Pauley [Perry], 84, of Tannersville, VA and formerly of Manassas, passed away peacefully in the early morning hours of December 29, 2021 at the home of her daughter in Warrenton, VA. Myra was born on June 23, 1937 in Stone, KY to... View Obituary & Service Information

The family of Myra Lou Pauley created this Life Tributes page to make it easy to share your memories.

Send flowers to the Pauley family.