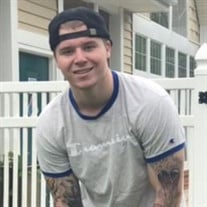 Michael William Span, age 21, of Gainesville, VA, passed away unexpectedly on November 26, 2021. Michael graduated from Patriot High School in Nokesville, VA in 2018. While there, he played lacrosse his freshman and sophomore years. Michael also enjoyed fishing and hunting. Michael was a much-loved son, brother, grandson, nephew, cousin, and friend. Even those who knew him for just a brief while, felt the light he brought to the world. He was preceded in death by his father Kevin Span and his paternal grandmother Mary Irene Span. He is survived by his mother Neila Span, his brother Nicholas Span, his paternal grandfather William (Bill) Span, his maternal grandparents Edward and Regina Chrisman, numerous aunts, uncles, cousins, and his loyal dog Duke. The family will receive friends on Saturday, December 4, 2021, from 5:00 – 7:00 PM at Pierce Funeral Home, 9609 Center Street, Manassas, VA 20110. Interment will be private. The family requests that memorial donations be made in Michael’s name to Herren Project at herrenproject.org/donate or Herren Project, PO Box 131, Portsmouth, RI 02871.

The family of Michael William Span created this Life Tributes page to make it easy to share your memories.

Send flowers to the Span family.