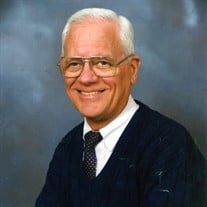 A Life of Service Michael Joseph McManus was born in Philadelphia, PA on January 21, 1930, and died on June 3, 2022, at Capital Caring’s Adler Center in Aldie, VA Michael Joseph McManus served as a Catholic Priest for the Archdiocese of Washington, DC after ordination on June 30, 1957,at the American College, in Louvain, Belgium. One summer as a seminarian, Michael was a stretcher bearer carrying the young and elderly sick, physically challenged, and suffering from the train station to the miraculous baths (waters) in the little hamlet of Lourdes, France where the Mother of God – the Immaculate Conception, appeared to Bernadette Soubirous, a poor shepherdess, from February 11 to July 16, 1858. Here is where his great love for the elderly and the sick blossomed and where his prayerful care for the innocent, vulnerable babies in the womb touched his protective, manly instincts and kind heart as well. Our lady/Mother of Jesus sparked his heart so that years later he began to pray the Rosary outside the Manassas, VA abortion center along with many, many prayer warriors after Mass on Saturday mornings. Their prayers were instrumental in closing the doors of the AAA Women for Choice Pregnancy Center on December 8, 2017 (Feast Day of the Immaculate Conception.) He was assigned to the Washington Hospital Center from 1960-1966 as the Catholic Chaplain ministering to patients on all faiths, after which he became the Executive Director of the U.S. Association of Catholic Chaplains at the National Catholic Welfare Conference (NCWC) – now the U.S. Conference of Catholic Bishops (USCCB) from 1966-1972. His last assignment was Pastor of St. Nicholas Catholic Church in Laurel, MD. In 1974, he left the priesthood and married Maggie, becoming the stepfather of her two children, Rusty, 14 years old and Kelly, 8 years old. Wanting to work directly with the elderly, Michael took the position of administrator of a retirement facility, the Episcopal Church Home in Georgetown, Washington, D.C. from 1978-1989. The last six years he biked to work. Michael loved to travel and was a true adventurer! So, in 1989 he and Maggie packed up a 17-foot Rental Truck with his Ford Ranger hitched to the back and headed to California, the wine country in Santa Rosa, to his new position as Executive Director of a Quaker retirement home. His tenure was from 1989-2000, moving back again across the country in the fall to be near the children and grandchildren and family in Philadelphia, PA. Michael and Maggie settled in Manassas, VA in 2001 where he enjoyed retirement while being conscientious about doing volunteer work and still using his God-given talents as a servant of God, mentoring preschoolers at All Saints Catholic School for 15 years. Michael (“the Knee Baby”) was the last of six siblings to go home to the Lord! Michael is survived by his loving wife of 47 years, Maggie; two precious children, Russell Lyle Barnes (Linda Ryan) and Kelly Schell Jones; two grandsons, the late Russell John “Rusty” Barnes, and Spencer Ryan Barnes; two granddaughters, Samantha Schell Weidhaas and Kimberly Paige Weidhaas, two sisters-in-law, June M. Martin, and Colleen Y. Stivers; as well as his nieces and nephews and their families, Cheri (Michael) Visconto, Brian McManus, Stephen McManus, MD and his wife Shanda McManus, MD, Michael McManus, and Mary Beth (Michael) Eversman. Michael will be missed by his family and many friends: AOH, KOC, church and Catholic men’s group, “That Man Is You.” He was a most grateful and faithful friend to all who visited him, loved him, and doctor appointments. Family and friends will gather for a Visitation on Sunday, June 12, 2022, from 7:00-9:00 PM, with a Prayer Service being held at 8:00 PM at Pierce Funeral Home, 9609 Center St., Manassas, VA 20110. A Mass of Christian Burial will be held on Monday, June 13, 2022, at 10:30 AM at All Saints Catholic Church, 9300 Stonewall Rd., Manassas, VA 20110. Burial will follow, at Mount Olivet Cemetery, 1300 Bladensburg Rd., NE, Washington, DC 20002.

The family of Michael Joseph McManus created this Life Tributes page to make it easy to share your memories.

A Life of Service

Send flowers to the McManus family.