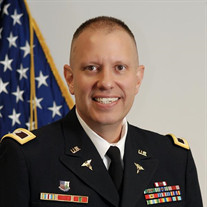 Michael Wayne Greenly, 53, of Clifton, Virginia, passed away on March 27, 2021. Michael was born on June 6, 1967, to Wayne and Joan Greenly in Ohio. Michael loved his family more than anything. He was married to his loving wife for 28 years. He dedicated 35 years of his life to the Army and served the country he loved. He was innovative while serving in Iraq, and now has an exhibit in the U.S. Army Medical Department Museum at Ft. Sam Houston, Texas, displaying his contribution to the Army Medical field. He enjoyed camping and reveling in Mother Nature. Thanks to his Eagle Scout journey, he taught his children the art of knotting and survival skills. Early in the mornings, if Michael was up, everyone else was up. His children would wake up to the song of “Early in the morning, the sun does shine. Open up the window and show your head. Up then my comrade, up then my comrade, early to see the morning dew” being projected from their father’s lungs. The neighborhood knew him for his horn-blaring, whether it was on New Year’s, or honking while he drove by. Some of his humor was never appreciated by his wife, but his children would laugh long and hard. Michael knew how to play good jokes on others (especially his father-in-law) and was always into mischief. Whether near or far, those that he loved were always dear. Michael is survived by his wife, Rene; Children Christopher, Sara, and Vanessa; Parents, Wayne and Joan; Brother Sean (Wife, Becky); Sisters Diane Hill (Husband, Dwight), Terri Grubb (Husband, Gene) and Karen Dial (Husband, Jim); Father and Mother-in-Law Elden and Sonja Ulbrich; Brother-in-law Ron Ulbrich (Wife, Tiffany), Bob Ulbrich (Jennifer), and several nieces and nephews. Services for Michael will be private, but you may watch the service at or after 1PM on Saturday, April 10th with this link: https://www.youtube.com/watch?v=cQBItAJDOho

Michael Wayne Greenly, 53, of Clifton, Virginia, passed away on March 27, 2021. Michael was born on June 6, 1967, to Wayne and Joan Greenly in Ohio. Michael loved his family more than anything. He was married to his loving wife for 28 years.... View Obituary & Service Information

The family of Michael Wayne Greenly created this Life Tributes page to make it easy to share your memories.

Send flowers to the Greenly family.