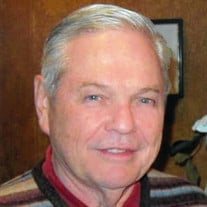 On February 26, 2021, Michael Joseph Gilbride passed into eternity after a long illness. Surrounded by his loving wife of 49 years, Catherine “Cathy” Cole Gilbride, and his adoring daughters, Karen and Megan, Mike drew his final breaths amid the sound of their voices as his favorite Irish music played softly in the background. Born December 4, 1939, in New York City to Irish immigrant parents, Mike, or Joe as he was called in his youth, grew up in a close-knit Irish Catholic community in Manhattan. As a boy he loved the New York Yankees, playing handball, and hanging out in the city with his older brother John, cousin Frank, and friends from the neighborhood. He attended Ascension School for his primary education and the De La Salle Institute for high school. Everyone who knew Mike throughout his life remarked on his exceptional mathematical ability, even Governor of New York Jacob Javits, who sent him a letter of commendation for his perfect math score on the Regents Exam. Mike attended Manhattan College, finished his undergraduate degree at the University of Maryland, and received an MBA from George Washington University. Mike’s father, John Gilbride, and mother, Bridget Hopkins, emigrated as teenagers from County Leitrim and County Mayo, respectively. They worked hard to provide a good education and a loving home for their sons. John carried with him Mike’s first pay stub as a reminder of the progress a single generation could achieve in the United States. Mike moved to Washington, D.C. in the mid-1960s and met Cathy Cole on a blind date in 1969. They married in December 1971, settled in Virginia, and had two daughters. While working for the Federal Communications Commission, Mike formed wonderful friendships with his co-workers, whose company he cherished long after he retired. He later went to work in the private sector, traveling for business to the far-flung corners of the world from Jordan to Vietnam. In his retirement years, Mike filled his days playing golf, bowling, watching movies, tutoring kids in math, swimming, managing his fantasy baseball and basketball teams, traveling with Cathy, and calling his daughters to give advice – both solicited and unsolicited. He loved his sons-in-law Keith Crowder (Karen) and Wesley Turner (Megan), and reveled in story time, playground visits, and trips to the ice cream parlor with his beloved grandchildren, Zoe and Marek Crowder, and Ulysses Turner. Mike’s 81 years on this earth are bookended by pandemics. At the age of two he contracted polio while on summer holiday in the Catskills. He endured a long recovery which imbued him with a zest for life and fun. Mike Gilbride excelled at fun. He loved to laugh and make others laugh. He made friends wherever he went and he was always grateful for those friendships. We will miss him more than words can express. In the lottery of life we all hit the jackpot with him as a husband, father, grandfather, and friend. A funeral mass and celebration of Mike’s life will be held at a later date to be determined. Donations in his name may be made to VITAS Community Connection, the hospice service that took such wonderful care of him in his last years. The online link is: https://vitascommunityconnection.org/ (please select Northern Virginia in the drop down box). Or you can donate by check to VITAS Community Connection. The mailing address for the donations is: VITAS Healthcare VCC Fund 3251 Old Lee Highway, Suite 200 Fairfax, VA 22030

The family of Michael Joseph Gilbride created this Life Tributes page to make it easy to share your memories.

Send flowers to the Gilbride family.