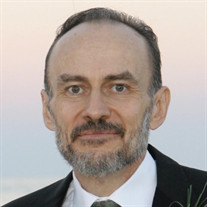 On a sunny and cooler Tuesday in September 1955 at 11:50 am a son was born to John and Beryl Douglas from York, Pennsylvania. He was named Merle Clay Douglas. 66 years, 5 months, and 4 days later Merle passed away peacefully after a hard-fought battle with lung cancer. During his time in this world, he served his country for 10 years as an honorable Naval petty officer. At age 22, he married the love of his life, Debbie, on the island of Oahu in Honolulu, HI. He went on to have two children, Jade, and Walter, and became a proud grandfather and even a great-grandfather. He traveled the world, worked as an IT administrator at the Pentagon in Washington D.C., and was a decades-long member and multi-faceted contributor to Hope Lutheran Church in Manassas, VA. His family and friends would best describe him as dependable, giving, patient, professional, fun-loving, and an altogether exceptional human being. His favorite things were spending time with his family, living an active lifestyle through exercise and biking, and enjoying science-fiction media and culture such as his favorite program, Star Trek. Always humble and ever-reserved, Merle was a dutiful servant. He served his country, his family, and his church in the highest regard. He was the type of person who would work earnestly in the background, but at the end of the day take none of the credit and lean away from the limelight. In the words of his commanding officer Captain D.J. Fitzpatrick, "[Merle] is a quiet and thoughtful individual and his performance has been outstanding. Previously he had the lion's share of his work center's jobs by himself, and he set the standard for all to be emulated. On and off station, his behavior far exceeded that required of a leader and Senior Petty Officer. In all respects, he has been a positive contributor to the productiveness and well being of the Command and he is an asset to this Division and the Ship." Were Merle still here, he would request that we not make an ordeal of his passing. According to his wishes, a simple service will be held to celebrate his life on Friday, February 18th at 1 pm at Hope Lutheran Church 10391 Sudley Manor Dr. Manassas, VA 20110. Dress-casual attire is recommended, and the service will be followed by fellowship and light refreshments. In lieu of flowers, Merle would have preferred donations in his name to Hope Lutheran Church or the American Cancer Society. Alternatively, volunteering a portion of your time to your preferred charity or organization in his honor. Finally, his last wish, if you are reading this, is to take this moment right now and reach out to someone special in your life and let them know that you love them. These are the special someones that Merle would let know that he loved them: his wife Debbie Douglas, daughter and son-in-law Jade and Robbie Robinson, son and daughter-in-law Walter and Gwen Douglas, grandchildren Kayla and husband Josh Hernandez, Alex Douglas, Jaelynn Douglas, Jennasis Robinson, and Chase Robinson, great-grandchildren, Roman Hernandez, and Hazel Simpson.

On a sunny and cooler Tuesday in September 1955 at 11:50 am a son was born to John and Beryl Douglas from York, Pennsylvania. He was named Merle Clay Douglas. 66 years, 5 months, and 4 days later Merle passed away peacefully after a hard-fought... View Obituary & Service Information

The family of Merle Clay Douglas created this Life Tributes page to make it easy to share your memories.

Send flowers to the Douglas family.