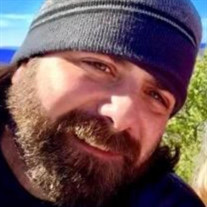 It is with the deepest sadness that we announce the passing of Matthew Patrick Wilson on January 26, 2021 at the age of 43. Matt was our beloved father, son, brother, brother-in-law, uncle, boyfriend, family member, and friend. His loss will forever leave a piece missing in the hearts of all that knew him. Matt was born in Morristown, New Jersey on July 22, 1977 and moved to Manassas, Virginia a short time later. Growing up in the Sudley area of Manassas brought with it all the fun and adventure a young boy could want to nurture his competitive and adventurous spirit. There were plenty of kids in the neighborhood around the same age allowing for lots of fun including baseball, football, basketball, roller hockey, and lacrosse games in the back yards, snowball fights and igloo building with every snowfall, and the epic games of flashlight tag that tormented all of the neighbors. There was also the exploring of the local creek beds, and yes, even the sewers which obviously led to his love of hiking and technical rescue later in life. Shortly after graduating from Stonewall Jackson High School, Matt followed in his sister Carrie Beth’s footsteps and joined the Stonewall Jackson Volunteer Fire Department & Rescue Squad, where he excelled as a unit officer and became a Life Member in 2007. Matt continued his career with the Manassas City Fire Department where he rose to the rank of Lieutenant. Matt was certainly a Fireman’s Fireman, dedicated to his brothers and sisters in service. He loved teaching the trade and can be credited by many still protecting the community, with showing them how to do the job the right way – with heart, determination, and skill. His selfless acts from the fire service continued over to many other parts of his life as well. He was always willing to drop anything to help a family member or friend in need. Whether it was helping someone move (even up multiple floors), just grabbing a beer and talking, or ensuring Mom’s kitchen was always stocked with groceries, Matt was always thinking of others first and was fiercely loyal to those he loved. Matt’s greatest passion in life was being a Dad to his daughter Addison. From the first day Matt got to hold his “Pretty Girl,” his world was never the same. At that moment, Addison had him wrapped around her sweet fingers and their father/daughter bond was formed. Matt spent the rest of his days ensuring she was well taken care of. He loved taking her on adventures and providing a life for her that many said he couldn’t. Whether it was participating in the Special Olympics, playing soccer, hiking, or just enjoying local events, Matt was always by her side. Matt’s other passions in life involved cooking, sports, hiking, and family. He found a love in cooking that he showed off to anyone interested in sharing a meal. He always volunteered to cook for all of our family gatherings and holidays, and for his shifts at the station. He would gladly make any meal he could for a friend going through a rough time. His love of sports started early in life playing every sport he could while growing up. Growing up he attended many baseball games at Shea Stadium cheering on the New York Mets. Of course, that love of the Mets also led to the yearly disappointment in their performance! He also loved the game of golf, spending hours watching and studying it, playing whenever he could, and caddying at Robert Trent Jones. Matt often made a sport of debating and loved to debate with his brother Kevin over who would win each golf tournament, and much to Kevin’s dismay, was right far too often. His love of hiking came a little later in life, but he took it on with enthusiasm. Even through the health issues he was dealing with, Matt loved being outdoors and moving. His hikes with his girlfriend, Dawn always provided an escape, and of course many, many great selfies as they reached the summit. Matt is survived by his daughter Addison; mother Patricia; sister and brother-in-law Carrie and Arnie and their sons Luke and Liam; brother and sister-in law Kevin and Keri and their son Tyler; and girlfriend Dawn and her children Juliana, Brookelynn, and Brayden. We know Matt is now with his family and friends that went before him and is looking down smiling on all of us, keeping us safe. The family will be receiving family and friends at the Stonewall Jackson Volunteer Fire Department and Rescue Squad on Thursday, February 4, 2021 between 4:00 pm and 6:00 pm. Due to the current COVID-19 restrictions, the reception will be conducted as a drive through. Funeral services will be held at Holy Trinity Catholic Church (http://www.holytrinityparish.net/) in Gainesville, VA on Friday, February 5, 2021 at 10:30 am. Seating for the service is limited to 300 attendees. For those unable to attend in person, the service will be available through the following link (https://youtu.be/4uTZ4wh_C20). Due to current COVID-19 restrictions, interment will be private. In lieu of flowers, the family asks that memorial contributions be made to a GoFundMe set up to benefit his daughter Addison (https://gofund.me/7bc1d6b9) or to the Virginia Soccer Association’s Top Soccer Program that Addison participates in (http://www.vsaonline.org/topsoccer/make-a-donation).

It is with the deepest sadness that we announce the passing of Matthew Patrick Wilson on January 26, 2021 at the age of 43. Matt was our beloved father, son, brother, brother-in-law, uncle, boyfriend, family member, and friend. His loss will... View Obituary & Service Information

The family of Matthew Patrick Wilson created this Life Tributes page to make it easy to share your memories.

It is with the deepest sadness that we announce the passing of...

Send flowers to the Wilson family.