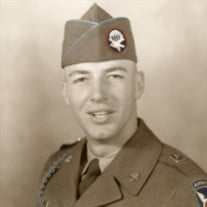 Matthew Peter Geene, Jr., 88, of Gainesville, Virginia passed away on July 17 at Lake Manassas Rehabilitation Center, Gainesville, Virginia from Cardiovascular Disease. Matthew was born and raised in Passaic, New Jersey where he graduated from Passaic Senior High School in 1951. He joined the Army in 1953 where he served in the 11th Airborne Division with an honorable discharge. Upon discharge, Matt attended Spartan School of Aeronautics and Technology in Tulsa, Oklahoma. He graduated in 1957. He married Christine Helen Obal, of Sayreville, New Jersey in 1958. He went to worked for the airlines at the National Airport. At this time, he opened A-1 Glass Company, Inc. located at 7278 Centreville Road, Manassas, Virginia in 1962. Matthew was a member of many local organizations, including the Moose Lodge, Park-West Lion and Izaak Walton. He served on the Prince William Junior Chamber of Commerce, as well as being active in the National Glass Association in Washington, DC; and The Virginia Glass Association where he served as President for a year. Matt was an avid golfer at Evergreen Country Club where he was a member and served a term on the Board of Directors. Matthew was preceded in death by his parents, Matthew and Alberta Geene; and his brother Albert Geene. He is survived by his loving wife of 63 years, Christine; sons, Garrett Matthew Geene and wife Patricia, Brandan Matthew Geene and wife Teresa; grandchildren, Garrett M. Geene, Jr. and wife Amanda, Christine M. Geene, Laura A Tindal and husband Kennard; great grandchild, Violet M. Tindal. Also, many step grandchildren, step great grandchildren, nieces, and nephews. The family will receive friends on July 21, 2021 at Pierce Funeral Home, 9609 Center Street, Manassas, VA from 6:oo PM to 8:oo PM. A Mass of Christian Burial will be held at 10:00 AM on July 22, 2021 at All Saints Catholic Church, 9300 Stonewall Road, Manassas, VA. Interment will be at Quantico National Cemetery at a later date. For those who desire, in lieu of flowers, donations in memory of Matthew may be made to: Manassas Park-West Lions Club or All Saints Church Building Fund.

The family of Matthew Peter Geene Jr. created this Life Tributes page to make it easy to share your memories.

Send flowers to the Geene family.