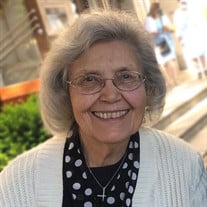 Mary Peterson, 85, of Fredericksburg, Virginia, fell asleep in the Lord Thursday, September 9, 2021, after a short illness. She was born to the late Efthimios and Angeliki Papageorgiou in Piraeus, Greece. She is predeceased by her beloved husband of 56 years, Peter Peterson and is survived by their three children: two daughters, Stavroula Psaraki Conrad (Christopher) and Angela Peterson Livanos, and son Steve Stavros Psarakis (Stefanie), all living in Virginia; six grandchildren, Andreas and Nikitas Conrad, Caroline and Maria Psarakis, living in Virginia, Kalli and Evangelos Livanos living in Athens, Greece; her nephew Efthimios (Calliope) Papageorgiou; niece Katerina Papageorgiou; and grandnephew Panayiotis (Elizabeth), all living in Athens, Greece. She is predeceased by her brother, Panayiotis (Maria) of Athens, Greece. As a child surviving both World War II and the Greek Civil War, Mary graduated high school at the top of her class, and then went on to graduate at the top of her class at the University of Athens at age 19, studying to be an elementary school teacher. She taught at the top private school in Athens and was selected to continue her studies in early childhood education in Paris. She was a published children’s author, writing a series of stories for children, and was fluent in Greek, French and German. Mary emigrated to Detroit, Michigan in March 1968 with her three children to join her husband in their new homeland. She taught herself English and was one of the foremost Greek language teachers in the Detroit area. She then went on to work in the family’s restaurants, baking the fresh homemade desserts for which she was well known, especially for her cheesecake at Peter’s Family Restaurant. She went on to establish the Sew Biz Tailor Shop in Southfield. She was a dedicated and active parishioner at Holy Cross Greek Orthodox Church in Farmington Hills, having served as the President of the Philoptochos Society there, supporting those in need. She retired in 1999 and relocated with her husband to Virginia, to be close to their children and grandchildren. While in Virginia, she was active and much beloved within the local Orthodox Church communities, having helped establish several Mission Parishes in the Northern Virginia area and having sponsored many godchildren. The funeral and burial will take place on Saturday, September 11, 1:00 pm at The Sacred Monastery of Saint Nina, 9002 Clemsonville Road, Union Bridge, Maryland, 21791 with the traditional Makaria meal following. The family asks that memorial donations be made to The Sacred Monastery of Saint Nina, 9002 Clemsonville Road, Union Bridge, Maryland 21791 or online at https://www.saintnina-monastery.org/donate.html May her memory be eternal!

Mary Peterson, 85, of Fredericksburg, Virginia, fell asleep in the Lord Thursday, September 9, 2021, after a short illness. She was born to the late Efthimios and Angeliki Papageorgiou in Piraeus, Greece. She is predeceased by her beloved... View Obituary & Service Information

The family of Mary Peterson created this Life Tributes page to make it easy to share your memories.

Send flowers to the Peterson family.