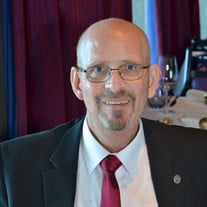 Mark O Petersen of Manassas, VA passed away peacefully Sunday, August 22, 2021. Mark was born December 14, 1962 in Millard County, Utah to Paul Petersen and Mary Ella Robison of Meadow. Growing up as the fifth of six boys in the family, he was heavily involved in sports and athletics, as well as the occasional hijink. He was also a stellar student, accepted to Brigham Young University on an academic scholarship, where he met the love of his life, Annette McCallum. Devout in his faith, he served an 18-month mission in Pusan, South Korea, as well as in various roles throughout his life serving his local congregation and community. Many of those roles involved the youth and scouting. Ever the outdoorsman, he raised 4 Eagle Scouts and took part in countless camping trips, high adventure excursions, and scout camps, where he taught life skills and leadership to dozens of young men through the years. He was a landscaper by trade, dedicating his life to the beautification of the world around him. He spent 23 years working for Pine Ridge Landscaping, later known as ValleyCrest and now BrightView, where he enjoyed working with hard-working, like-minded individuals. BrightView afforded him the balance in life to both support and take time with his family. In later years, his BrightView team was compassionate and flexible in helping him manage his commitments through his treatments and procedures. Though his later years came to be defined by illness and the shortcomings of his body, he continued ever stronger in spirit, in love for his family, and in love and service to his Father in Heaven. He especially enjoyed spending time with his 4 granddaughters, which always brought a special light to his face. He is preceded in death by his parents, brother Scott, nephew Garrett and son Matthew. He is survived by his wife of 36 years Annette, his brothers Gary, Kim, Marlo, and Terry, his children Joshua (Kena), Michael, Emily (Alex), Andrew (Krystina), Jeremiah, and Jenny, as well as his 4 granddaughters and many nieces and nephews. Funeral services will be held Saturday August 28 at 10am, at 5750 Websters Way, Manassas, VA 20112.

Mark O Petersen of Manassas, VA passed away peacefully Sunday, August 22, 2021. Mark was born December 14, 1962 in Millard County, Utah to Paul Petersen and Mary Ella Robison of Meadow. Growing up as the fifth of six boys in the family, he... View Obituary & Service Information

The family of Mark O. Petersen created this Life Tributes page to make it easy to share your memories.

Send flowers to the Petersen family.