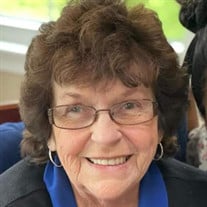 Marilyn Elizabeth Stuart, age 79, died Saturday, May 8, 2021 at her home in Manassas, VA. She was born in Middleton, MA to the late Dell and Clara Greeke. Marilyn was raised in Massachusetts, but after marrying her late husband, moved to... View Obituary & Service Information

The family of Marilyn Elizabeth Stuart created this Life Tributes page to make it easy to share your memories.

Send flowers to the Stuart family.