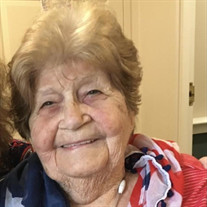 Margaret Mary Reynolds (nee Glynn), age 88, passed away on January 4, 2022, at Prince William Medical Center, following a long struggle with Parkinsons and Dementia. Peggy was born on April 21, 1933, in Boston, MA and has been a resident of Manassas, VA since 1966. She is predeceased by her husband of over 60 years, William Lester Reynolds, who passed away in 2017. She is also predeceased by her parents, Owen and Theresa Glynn; five siblings (Eugene, Thomas, Theresa, Owen, & Paul); and an infant daughter, Donna. Peggy was a strong matriarch of a large family. She instilled many core values including love and service, and above all family togetherness, peace, and love. She is survived by five children and their spouses, William Reynolds (Karen), Robert Reynolds (Paula), Thomas Reynolds (Wendy), Cheryl Boston (Mark), and James Reynolds (Ellen); one sister, Irene Kimball of Bridgewater MA; and eight grandchildren, Amy Johnson (Dan), Kevin Boston (Sara), Allison Boston, Megan Reynolds, Nicholas Reynolds, Sara Kate Reynolds, Jessica Reynolds, and Benjamin Reynolds. Peggy was the most selfless loving person and enjoyed most being with her kids, grandkids, and many nieces and nephews. She enjoyed puzzles, bingo, and dogs. Peggy was truly special and will be missed but never forgotten. Family and friends will gather for a Visitation on Monday, January 17, 2022 from 7:00 PM - 9:00 PM at Pierce Funeral Home, 9609 Center St., Manassas, VA 20110. A Mass of Christian Burial will be held on Tuesday, January 18, 2022 at 10:30 at All Saints Catholic Church, 9300 Stonewall Rd., Manassas, VA 20110. Burial will follow at 12:00 PM at Stonewall Memory Gardens, 12004 Lee Hwy., Manassas, VA 20109. In lieu of flowers, donations may be made in Peggy’s honor to the Parkinsons Foundation or to a Dementia organization of your choosing. A special thanks to the wonderful and caring staff at Prince William Medical Center for their care over the last few weeks as well as to several special caregivers who loved and served Peggy with devotion and dignity.

Margaret Mary Reynolds (nee Glynn), age 88, passed away on January 4, 2022, at Prince William Medical Center, following a long struggle with Parkinsons and Dementia. Peggy was born on April 21, 1933, in Boston, MA and has been a resident... View Obituary & Service Information

The family of Margaret Mary Reynolds created this Life Tributes page to make it easy to share your memories.

Send flowers to the Reynolds family.