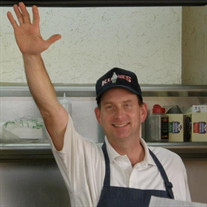 Lynn Paul Kline, age 59, died Tuesday, January 18, 2022, at his home in Nokesville, Virginia. Lynn was born on May 19, 1962, in Warrenton, Virginia to the late Paul Emerson Kline and June Sadd Kline. He was the youngest of 7 children. Lynn grew up in Manassas, Virginia and moved to Nokesville, Virginia after marrying his wife of 37 years, Joan Murray Kline. Lynn enjoyed growing up on the farm and farming with his father, raising crops and cattle. He participated in 4H, showing animals at the county fair. During high school, he was active in the FFA, band, and ran track at Brentsville District High School. Lynn met the love of his life, Joan Murray Kline at the age of 15 while working together at his family restaurant, Kline’s Drive-In. Lynn graduated in 1980 and continued to farm and work at the restaurant. Lynn and Joan were married in 1984 and started a family. In 1990, Lynn and Joan took over the family restaurant from his parents. During this time, Lynn employed many people. He especially enjoyed working with youth, and he gave many teenagers their first job. Lynn also worked with Youth for Tomorrow to provide jobs for youth in their program. Lynn gave back to the community in many ways such as donating hotdogs and hamburgers to school events and giving out free ice cream coupons. Lynn and Joan continued to work in the restaurant business until 2007. After selling the restaurant, Lynn went to work at Branscome Paving as a trucking supervisor. He enjoyed working with the many employees at Branscome, where he was treated like family. Lynn was a life-long member of the Manassas Church of the Brethren. He was a man of strong faith, and he showed it through the way he lived. Lynn was a camp counselor at Camp Shiloh, a Church of the Brethren summer camp. Later in life he was the advisor for 9 youth workcamps, a youth advisor, member of the church board, usher, and deacon. Running was Lynn’s passion. He was an avid runner, participating in ultra-marathons with his brother Wayne. The longest race he ran was a hundred-mile race. He enjoyed the outdoors and the comradery of being part of the running community. Throughout his life, Lynn was a hard worker and man of God. He was a loving husband, father, and grandfather, who cared deeply for his family. Lynn enjoyed going on cruises and to the beach with family and friends. He always had a smile on his face, a kind word to share, and he never knew a stranger. Lynn is preceded in death by his parents Paul and June Kline, mother-in-law Kathleen Murray, and brother-in-law Harold House. Lynn is survived by his wife Joan Murray Kline, daughter and son-in-law Carla and Marc Barb, son Paul Kline, daughter Lindsay Kline, granddaughters Sarah and Caroline Barb, siblings Jeanette (Doug) Shonk, Helen (Burt) Wolf, Wayne (Loretta) Kline, Bonnie (Melvin) Cheshire, Lorraine (James) Croushorn, and Donna House, father-in-law John (Colleen) Murray, brother and sister-in-laws Kathy (Stan) Reynolds, John (Cynthia) Murray, Joseph (Hershey) Murray, Patricia (Robert) Wentz, Jeffrey (Theresa) Murray, Lisa (Nathan) Murray, and many nieces, nephews, and great nieces and nephews. In lieu of flowers, please consider making a donation in loving memory of Lynn Paul Kline to the Manassas Church of the Brethren or the American Cancer Society.

Lynn Paul Kline, age 59, died Tuesday, January 18, 2022, at his home in Nokesville, Virginia. Lynn was born on May 19, 1962, in Warrenton, Virginia to the late Paul Emerson Kline and June Sadd Kline. He was the youngest of 7 children. Lynn... View Obituary & Service Information

The family of Lynn Paul Kline created this Life Tributes page to make it easy to share your memories.

Send flowers to the Kline family.