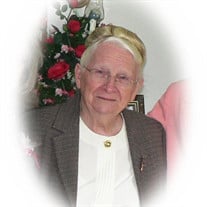 Lois Carolyn Utz Whorton, age 88, died Sunday morning April 18, 2021 at her home in Centreville, Virginia. She was born in Rappahannock County, VA in the tiny settlement of Estes, on May 17, 1932. She was the 6th of nine children of Mary Elizabeth... View Obituary & Service Information

The family of Lois Carolyn Utz Whorton created this Life Tributes page to make it easy to share your memories.

Send flowers to the Whorton family.