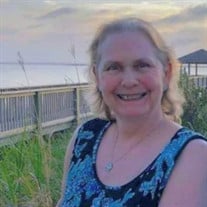 Linda Corley Napolitano, homemaker and Cosmetologist, went to her heavenly home on Tuesday Jan. 25, 2022, after a silent battle with breast cancer. She was surrounded by her family. Linda was born on Jan 27,1958 in Lebanon, PA to James and Heidi Corley. With a military father, she spent her formative years in Germany and had a close relationship with her maternal grandparents. After returning to the states, her family settled in Huntsville, AL where she met her future husband at Grissom High School. Upon graduation, she married the love of her life on 8/13/1977 and relocated to Manassas, VA. In her early years of marriage, Linda worked as a Cosmetologist. Once her first daughter was born, she chose to be a fulltime mother and homemaker, continuing her devotion for animal rehabilitation. In later years she was involved with wildlife rehabilitation and worked as a teaching assistant in a local preschool. Linda was an avid animal lover, never being without a pet in her home. She had an affinity for Cats and Box Turtles. She was a devoted Raven’s fan (for which she has been forgiven by her Redskins family). She was an active member of Hope Lutheran Church, enjoyed shopping, traveling and spending time with family and friends Linda is survived by her loving husband, Carl, of 44 years, 3 daughters Amanda (Jose), April (Jordan), Alana (David) and 5 grandchildren. Visitation will be held at Pierce Funeral Home, 9609 Center St, Manassas, VA on Monday 1/31/22 from 6 to 8 pm. Her Funeral will be held at Hope Lutheran Church, 1092 Sudley Manor Dr, Manassas on 2/1/22 @ 10:30 am. Interment is scheduled to follow @ 12 noon at Stonewall Memorial Gardens of Rt 29. In Lieu of flowers, contributions can be made to an Animal Shelter of your choice.

Linda Corley Napolitano, homemaker and Cosmetologist, went to her heavenly home on Tuesday Jan. 25, 2022, after a silent battle with breast cancer. She was surrounded by her family. Linda was born on Jan 27,1958 in Lebanon, PA to James and... View Obituary & Service Information

The family of Linda Corley Napolitano created this Life Tributes page to make it easy to share your memories.

Send flowers to the Napolitano family.