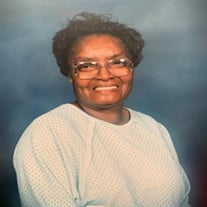 On Saturday August 14, 2021, Lillian Edith Washington-Barber-Duncan went home to be with the Lord. Edith (as she was called by her parents) was born to John and Geneva Washington in Stafford County Virginia on January 18, 1926. Edith attended The Manassas Industrial School, known as Jennie Dean Elementary School, as we know it today. As a young woman she attended Shiloh Baptist church in Stafford County Virginia with her mother and father and where her father served as a deacon of the Shiloh church. She joined Shiloh Baptist church as served as an usher for many years. Lillian met and married Arthur Lyn Barber Sr. of Rock Hill, South Carolina and moved to Washington D.C. where they lived and raised two children, Evelyn and Arthur, Jr. Barber. While living in Washington D.C. she worked as a cook for many years. She was known to be an excellent cook and loved to cook. As a result, her friends called her “Cookie.” Her dream was to open a restaurant. Even though she was unable to open the restaurant, she would prepare food for church events, holidays, family gatherings, neighbors, and friends. She had a helping spirit and was a source of inspiration and encouragement to all those she loved and came in contact with. Later in life, Lillian married William E. Duncan (Pop Pop/Bill) of Louisa County, Virginia. She and Bill lived in Catlett, Virginia. She retired from her job to care for her ailing mother and father. Lilian and Bill attended and later joined Mt. Zion Baptist church of Fredericksburg where she also served as an usher until she moved her membership to Oak Shade Baptist Church in Catlett, Virginia. Lillian lived with her daughter and son-in-law until she began residing in the Manassas Health and Rehabilitation and Nursing Home in Manassas, Virginia. Lillian leaves behind a daughter, Evelyn Astwood, a son-in-law, Stephen Astwood, a son Arthur L, Barber, Jr, a daughter-in-law, Nancy, two grandsons, Seth Astwood (Tiffanie) Donovan Astwood (Rebekah) and five great-grandchildren, Isaiah, Katelyn, Ezekiel, Jeremiah, and Tobias Astwood and a host of nieces and nephews. When the Lord called her, she was ready to go home. Lillian Edith Washington-Barber-Duncan went home to be with the Lord on August 14, 2021. A Celebration of Life will be held on Friday, September 3, 2021, at Pierce Funeral Home, 9609 Center St. Manassas, VA 20110. Conducting will be Reverend Jesse Jones, Jr., Pastor of Oak Shade Baptist Church. The family will welcome friends for a visitation from 10:00-11:00 AM, followed by funeral services at 11:00AM. Burial will take place at 1:30PM at Glen Haven Memory Gardens in Fredericksburg, VA.

On Saturday August 14, 2021, Lillian Edith Washington-Barber-Duncan went home to be with the Lord. Edith (as she was called by her parents) was born to John and Geneva Washington in Stafford County Virginia on January 18, 1926. Edith attended... View Obituary & Service Information

The family of Lillian Edith Washington-Barber-Duncan created this Life Tributes page to make it easy to share your memories.

Send flowers to the Washington-Barber-Duncan- family.