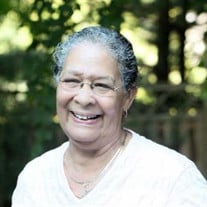 Laura M. Hill, affectionately known as “Mozelle” or “Mom Mo” to many, was born on February 13, 1941, to the late George Alexander West and Margaret Elizabeth Fisher, in Remington, Virginia. In her early years, Mozelle was raised with her siblings on North Rock Farm in Fauquier County. She was also reared and educated in Madison Town, Warrenton, Virginia where she graduated from Taylor High School. Mozelle would later complete two years of Nursing School and become a nursing assistant at Fairfax Hospital. In 1955, Mozelle met Charles R. Neal, Sr. They married in 1957 and together they raised five children in Falls Church and Dale City, Deborah Willingham (Anthony), Charles Neal, Jr., Kimberly Neal and Margaret “Kathy” Neal. She was preceded in death by her son, Mark Anthony Neal in 2020. Mozelle later met Julius “Sonny” Hill and they were united in marriage in August of 1985. She was a loving stepmother to Sonny’s children, Brian and Denise Hill. Mozelle was introduced to her Lord and Savior, Jesus Christ at an early age. In her adult years she, along with her family, became members of Mt. Pleasant Baptist Church in Alexandria, Virginia. While attending Mt. Pleasant, Mozelle taught Sunday School, sang in the Adult Choir and participated in many other church activities. She later united with Shiloh Baptist Church in Alexandria, Virginia; Kingdom of God Deliverance Ministries, Intl. in Manassas, Virginia and, most recently, served with the Edified Body of Christ Church. She enjoyed singing with her fellow parishioners on Sundays and because of her loyalty, she was affectionately named “Ruth” by her Pastor, Dr. Frye. Mozelle was a dedicated employee and held many positions with Galbreath-Ruffin Corporation, located in the Mobil Oil Building in Falls Church, Virginia. While there, she formed many special friendships with her colleagues. After several years of service, she retired from Galbreath Ruffin in 2001. Mozelle truly loved her family. Those who knew her, knew that she was “Grandma the Babysitter”. Mom, lovingly babysat ALL of her grandbabies – grands and great-grands. Mom Mo was always the LIFE OF THE PARTY. Mom loved to get together with friends and play cards, too. And oooh how she loved to dance. She would tell stories of how she and her special dance partners would often cut a rug at Cross Creek. Most recently, she was revered as The Special Occasions Band’s #1 Supporter. She was always on the dance floor doing her signature two-step with a twist, finger in the air. No matter the occasion, she would always find a reason to enjoy life to the fullest! Mozelle leaves to cherish her memory, her loving husband Julius “Sonny”, her devoted children; her siblings, Deacon Eugene Pollard (Joyce), Ola Lloyd, Shirley Pollard, Kelvin “Jimbo” Pollard and Raymond “Rainbow” Pollard; her grandchildren and great grandchildren. She was preceded in death by her father, George; mother, Margaret; sister, Jeannie Chichester; brother, John “Frank” West; and son, Mark. Also cherishing her memory is a large host of nieces, nephews, God children, cousins, and very special friends. Her legacy is rich and the love she has sown into so many lives is evident to this day. She will forever be remembered for her “hey baby” and for giving the best hugs. We love you, Mom. “Never goodbye, always see you later.”

The family of Laura Mozelle Hill created this Life Tributes page to make it easy to share your memories.

Send flowers to the Hill family.