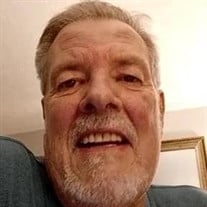 Larry Joseph Sheetz of Catlett, VA passed away on December 27th, 2021, at the age of 64 at Fauquier Hospital. After several months of declining health, Larry died peacefully with his wife Cathy by his side. Larry was born on September 29, 1957 in Washington, DC, to Joseph S. and Shirley A. Sheetz Jr. Larry graduated from Stonewall Jackson High School in Manassas, VA in 1976. He was a painter by trade, following in his father’s footsteps. He married in 1981, to Cathy, celebrating their 40th wedding anniversary this year. He enjoyed many hobbies including camping with his family, collecting comic books and Hot Wheels, playing the lottery, and slot machines. He is a member of the Winchester-Shenandoah Valley Hot Wheels Club. Larry was preceded in death by his parents Joseph S. and Shirley A. Sheetz Jr. and his sister Lisa D. Griffin. He is survived by his wife Catherine Renae Sheetz; son Darrell L. Wampler, and daughter Brandy L. Denny and her husband Anthony M. Denny; grandchildren Evalynn Layla Green Denny, Odin Matthew Denny, Adam Clayton Christian Wampler, and Arkyn Joseph Dewayne Denny. Larry was a family man, and battled many years of heart issues to ensure his grandkids had memories to remember him by. He is adored by his daughter and she plans to carry on his memory by sharing camping memories with his grandchildren and what she was taught by him. Annually she will play 618 (Cathy and Larry’s wedding anniversary) and 929 (his birthday) lottery numbers in his memory. He instilled in his son a strong work ethic and the knack to tinker with anything mechanical, a skill which will be passed down to the grandchildren by his son. The family finds peace in knowing that Larry is reunited with his parents, extended family, and his best friend Dixie; and they are rejoicing together. “Pop” as he was so lovingly called by his grandchildren, will be deeply missed. A visitation for Larry is planned for Sunday, January 2, 2022 from 11 am to 1 pm. The visitation will be at the Pierce Funeral Home on 9609 Center Street, Manassas, VA. All are invited to attend. The funeral will follow immediately at 1 pm. The graveside service will be held at 2 pm at Stonewall Memory Gardens. In Lieu of flowers contributions to the American Heart Association can be made in his honor.

Larry Joseph Sheetz of Catlett, VA passed away on December 27th, 2021, at the age of 64 at Fauquier Hospital. After several months of declining health, Larry died peacefully with his wife Cathy by his side. Larry was born on September 29, 1957... View Obituary & Service Information

The family of Larry Joseph Sheetz created this Life Tributes page to make it easy to share your memories.

Send flowers to the Sheetz family.