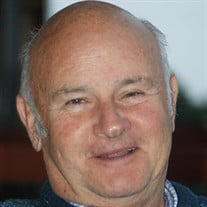 Not sure what to send?

Larry Roger Mote passed away peacefully on April 29, 2022, at the age of 85 surrounded by family. Larry was born on April 17, 1937, in Coshocton, Ohio, to Boyd and Hazel Mote. From Ohio, his family moved to California and then to Tennessee, where his father established a dairy. Larry and his brother, Dick, worked long hours in their father’s dairy and looked forward to getting out on their own. Following his childhood dream to be a baseball player, Larry tried out for some minor league baseball teams. Although he applied for and was accepted to the Pratt School of Engineering at Duke University, Larry decided to postpone college and join the Air Force. He was stationed in Germany for several years and became fluent in German and Russian. After leaving the service, Larry attended the University of Maryland, graduating with a B.S. in Economics. He did his postgraduate work at Cornell University, earning a PHD degree in Economics. In 1963, while in grad school, Larry met the love of his life, Judy Boehmer, at a Christmas party in Syracuse, New York. It didn’t take long for Larry and Judy to tie the knot. They were married on June 20, 1964 in Ithaca, New York. The couple eventually settled in Flossmoor, Illinois where they raised their four children: Jeffrey, Kevin, Jennifer, and Christopher. Larry worked as an Economist at the Federal Reserve Bank in Chicago for 28 years before moving to Washington D.C., where he spent 10 years as a Senior Economist for the Office of the Comptroller of the Currency. He also taught classes in money and banking at several colleges. Larry finished his career consulting for the IMF on various projects in Mauritius and Ukraine. Larry is survived by his wife, Judy, four children, 9 grandchildren and 3 great-grandchildren (and counting). Larry and Judy shared many grand adventures together. When not exploring the U.S. visiting friends and family, they travelled the world. They enjoyed ocean and river cruises, including trips up the pacific coast to Alaska, through the large rivers of Europe and around the Greek Isles. They downed pints in Dublin, shopped at Turkish bazaars, gazed at the Northern Lights in Norway, and embarked on a South African safari. Larry was also somewhat of a daredevil as he bungy-jumped and sky-dived sometime after his 60th birthday. Larry’s children have many fond memories growing up with their father including: long road trips to visit national parks and Cape Cod while piled in the back of the red Volvo station wagon; the year they spent in Eugene, Oregon, while Larry took a position as a visiting professor at the University of Oregon; the craftsmanship he displayed when helping out with Cub Scouts projects, designing the Jimmy Carter peanut processor for a school fund-raising production, building floats for Fourth of July parades, assembling science fair projects and constructing a backyard tree house, among many other projects…. Larry loved the outdoors and exploring geographic landmarks and, when he wasn’t clowning around with one of his kids or grandkids, he was always ready to take a hike, explore a new city or visit a winery. He also loved sports. He would come home after a long day of work and spend hours playing catch with his kids, or coaching their baseball teams. On Thanksgiving, he would be out on the field playing tackle football with his kids and their friends. Once his kids were out of college, he would often play on their softball teams and he was very formidable at tennis and basketball, playing well into his 70's. Even getting both knees replaced at the age of 75 did not slow Larry down, as he completed a 6-mile hike in the Shenandoah National Park with his family that same Thanksgiving. Larry lived a full, rich life. He was intelligent and kind, with a great sense of humor. He will be missed deeply by his friends, family and wife. A memorial is scheduled for June 5th from 12 to 3 pm at the Pavilion in Occoquan Forest. Anyone who knew Larry is welcome to join his family in celebrating his life. Please come with a story to share.

Larry Roger Mote passed away peacefully on April 29, 2022, at the age of 85 surrounded by family. Larry was born on April 17, 1937, in Coshocton, Ohio, to Boyd and Hazel Mote. From Ohio, his family moved to California and then to Tennessee,... View Obituary & Service Information

The family of Larry R. Mote created this Life Tributes page to make it easy to share your memories.