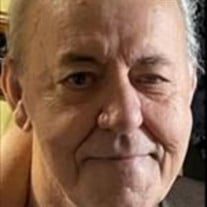 Larry Ronald "Bear" Freeman, 70, of Manassas Park, Virginia, passed away on September 13, 2021. He was born to Orbin and Lona Freeman on August 6, 1951 in Dante, Virginia. Larry grew up in Tomscreek, VA in Wise County. In 1968 he moved to Illinois. After a couple of years he divided his time between Aurora, IL and Tomscreek, VA. In 1982 Larry married his beautiful wife Ella, they spent many years together. Larry's younger years of employment consisted of factory work, warehouse work, security guard and a transit bus driver. Larry was a loving husband, father, grandfather, great-grandfather, brother and friend. He was a firm believer in the spoken word of God. He will be sorely missed and lovingly remembered. His family is consoled knowing that he is now in paradise, with his Lord, Jesus Christ. There, he has been reunited with his family and friends who have gone before him. Larry enjoyed spending time with his family, home cooked meals, football and Nascar racing. He was a lover of nature, hunting, fishing and vegetable gardens. Larry had a wonderful sense of humor and was a generous soul with a beautiful smile that lit up the room. Larry joins his parents, Orbin and Lona; Wife, Ella Louise Freeman; Daughter, Rachel Lynn Freeman; Sons, Jonathan David Freeman and Joseph Andrew Collins; Siblings, Harlan Freeman (Kathy), Dale Freeman (Kathy), Loyal Freeman (Patsy), Roger Freeman, Dewey Turner (Rosa), and Glenda Hooker. Larry is survived by his daughter, Melissa Griffin (David); Grandchildren, Austin Winebarger, Desirae Collins, Christian Collins, Benjamin Freeman, Arianna Freeman, Zackary Freeman, Samuel Belcher, and Aniyah Griffin; Great-Grandchild, Axton Winebarger; Brother, Jerry Freeman (Doris) of Dekalb, IL; and Sisters, Rebecca Freeman of Johnson City, TN and Betty Lovett of Piney Flats, TN. And a host of other nieces, nephews, cousins and friends. Larry will always be remembered by his family for his love of life. A memorial service will be held for Larry on Friday, September 24, 2021, at 1:00 PM at Pierce Funeral Home, 9609 Center Street, Manassas, Virginia 20110. Condolences may be sent to www.piercefh.com

Larry Ronald "Bear" Freeman, 70, of Manassas Park, Virginia, passed away on September 13, 2021. He was born to Orbin and Lona Freeman on August 6, 1951 in Dante, Virginia. Larry grew up in Tomscreek, VA in Wise County. In 1968 he moved to Illinois.... View Obituary & Service Information

The family of Larry Ronald Freeman created this Life Tributes page to make it easy to share your memories.

Send flowers to the Freeman family.