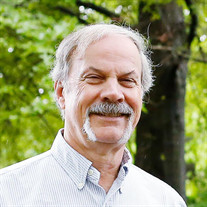 Lance R. Palmer, 69, died Thursday, July 29, at his home in Catharpin, Virginia at 10:01 in the morning, the same time of day his mother passed away years earlier. His wife and children were by his side during his final moments. He had fought a very tough and brave battle against a rare, swift moving cancer since January of this year. He was born to Lawrence and Margaret Palmer on a cold January day in Denver, Colorado. The youngest of four children, he is survived by his brother Cody and sisters, Crystal and Merily. Besides living in Denver, they called Cheyenne, Wyoming, Portland, Oregon, and Albuquerque, New Mexico home before their last stop in the Washington, DC area. Lance was a very passionate individual in all aspects of his life. He would carve out time to read bedtime stories to his children, attend and assist with coaching his daughter’s softball matches across the country, and worked long days at work. He felt honored to have the opportunity to work at the Pentagon and White House. He worked even harder on weekends helping to maintain his and his wife’s dream home and surrounding property. Lance is survived by his wife, Cecilia, and his children, Byron, Matthew, Katherine along with daughter-in-law, Savannah, grandson, Landry on the way, and future son-in-law, Jeff. They meant the world to him. He was always there for school plays, concerts, sports games, homework projects, softball coaching, driving lessons, graduations and simply lending an ear and advice when needed. In addition to being a dependable, loving, and caring father and husband he was also referred to as the cool uncle by his nieces and nephews. Lance never lost his sense of humor and affinity for dad jokes. When in a playful mood, his favorite saying was “Rule #1: Dad is always right. Rule #2 Refer back to Rule #1”. Outside of family and work, his hobbies included exploring nature, observing astronomical events, investigating his ancestry, and enjoying Ansel Adam’s photography which he was able to pass onto his kids. The incredibly scenic countryside of his childhood years gave him a love of being outside in nature that lasted his lifetime. Vacations and spur-of-the-moment day trips almost always included hikes into the mountains or natural areas at whatever destination was chosen. Lance excelled at following topographical maps, planning the routes, researching the best gear available, checking pack content weight, and navigating the trails. The wildlife aspect of being on the trails wasn’t as natural for him. A favorite story is of his wife, Cecilia, rinsing dinner dishes in a mountain stream and being entranced watching a bear heading to the stream from the other side. She sat still and enjoyed watching it. Lance came from the campsite, spotted the bear, called out with excited fear ‘There’s a bear!!!’. He turned and ran back toward the campsite, yelling for Cecilia to follow. The bear, of course, was just as frightened and ran in the opposite direction. Possibly his most favorite times were the years he was part of a team of three dads coaching a fastpitch travel softball team for his daughter through her middle and high school years. He was very dedicated to his team and his style earned the nickname ‘Coach Lancing’. Lance was an engineer specializing in audiovisual applications. He worked for Audio Video Systems and then M.C. Dean in Tysons Corner, Virginia. The post 9/11 era was especially busy for him with government offices needing critical video call capabilities in a conference room setting. The longest-lasting project he enjoyed the most, is the design and construction of a forty-one-foot video wall for the National Geospatial Intelligence Agency in Springfield, Virginia. He leaves a hole in many lives that will be never be filled. A life remembrance will be held in a Visitation and, later, a celebration of life. His ashes are to be spread in the spring on his home property he loved so much. Visitation: Thursday, August 12, 2021 6 – 8 pm Pierce Funeral Home 9609 Center St, Manassas, VA 20110 Celebration of Life details to follow

Lance R. Palmer, 69, died Thursday, July 29, at his home in Catharpin, Virginia at 10:01 in the morning, the same time of day his mother passed away years earlier. His wife and children were by his side during his final moments. He had fought... View Obituary & Service Information

The family of Lance Robert Palmer created this Life Tributes page to make it easy to share your memories.

Send flowers to the Palmer family.