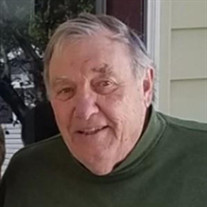 Kurt Frevert was the beloved husband of Anita Frevert for 53 years and the beloved father of Kurtis and Kevin Frevert. The tragic loss of this fine man will be carried in their hearts forever. Kurtis “Kurt” K. Frevert was born 11 January 1941 in Great Bend Kansas to Victor Wilbur Frevert (1910-1994) and Ardelia nee Wamhoff Frevert (1911-1987). He died on 10 Dec 2020 (age 79) in Dumfries, Virginia of a long illness. Kurt grew up in his parents’ hometown, Holyrood, Kansas, surrounded by grandparents and great grandparents until age 5. He attended the church that his paternal and maternal great-grandparents founded in 1870—St. Peter Lutheran Church.* In 1946 he and his parents moved to Bird City, Kansas, after his father and his uncle Alvin Wamhoff bought a hardware store and named it the F & W Hardware Store. He lived above the hardware store until his parents built a brick home when he was 15 years old. He was confirmed at St. John Lutheran Church in Bird City. Kurt graduated from Bird City High School in 1959 where he lettered in football, basketball, and track. He marched in the B.C.H.S. band dressed in his football pads while playing clarinet during the half times of home games. Kurt worked in the F&W Hardware Store and, in the summers, he lived and worked on the M. B. farm outside Bird City. He loved telling how he and his high school buddies bought an old hearse and turned it into the town’s “hotrod.” After high school, Kurt enrolled in Wartburg Lutheran College in Waverly Iowa. He graduated from Wartburg in 1969 with a Bachelor of Science Degree in Applied Mathematics and Economics. He played tackle on the Wartburg Knights’ football team. In his junior year, he transferred to Kansas State University in Manhattan Kansas to study electrical engineering. Kurt served as an officer in his fraternity Tau Kappa Epsilon. He met his future wife in January 1964 in Kansas City Missouri. Kurt was drafted in 1965 and attended Basic Training in Ft. Polk Louisiana. There, he was selected for the U.S. Army’s Signal Corps and trained at Ft. Monmouth NJ and in San Francisco CA. He was sent to Vietnam in January 1967 to repair encryption equipment on military posts in Vietnam and Laos. For a man who was uncomfortable with heights and flying, he was proud of all the times he was flown in open Huey helicopters to remote combat bases to restore urgently needed decoding equipment. Kurt married Anita Lucille Eagle (1944- ) on December 27, 1966, at the North Cross Methodist Church in Kansas City North, Missouri. They spent their wedding night at the historic Muehlebach Hotel in Kansas City MO where they returned several times during their 53-year marriage. In 1969, Kurt was invited to join the new “Bioengineering” graduate degree program within the College of Electrical Engineering at the University of Missouri in Columbia. He presented his research findings at several academic and professional conferences. He graduated with a Master’s of Science degree in Electrical Engineering from the University of Missouri at Columbia in 1971. On 15 September 1971, Kurt and Anita welcomed their first child, Kurtis Victor, born in Columbia Missouri. On 4 November 1972, they welcomed their second son Kevin Kyle born in Kansas City Missouri. In 1973 he moved his family to Huntsville AL where he helped engineer the Hubble Telescope at Northrop Aerospace, Inc.—the telescope that is still searching the skies today. In 1974 the family moved close to the Johnson Space Center in Houston TX where Kurt was Chief Engineer, Program Manager, and Executive at Singer Link Flight Simulation, Inc. Kurt was responsible for the hardware and software of Link’s multiple motion-based simulators used to train astronauts to fly the Space Shuttle. He enjoyed troubleshooting the coding which drove the Shuttle’s multiple, interfacing computers and earning the gratitude of astronauts such as John Young, Bob Crippen, Richard Truly, and Joe Engle. Kurt and his family were members of Gloria Dei Lutheran Church in Nassau Bay TX. Kurt semi-retired in 1997 to oversee the design and construction of a home overlooking Beaver Lake in Northwest Arkansas. He served as an engineering consultant to several companies including Baldwin Electronics and Beta-Rubicon in Fayetteville Arkansas. He was a member and trustee of Holy Trinity Lutheran Church in Rogers Arkansas. Kurt enjoyed cutting up and splitting deadfall hardwood trees on the 20 acres of their Beaver Lake home. He enjoyed fishing and driving his boat for waterskiing grandchildren or driving the jetski as they tubed behind him. In 2019, Kurt and Anita sold their lake home and property on Beaver Lake and moved to Northern Virginia to be close to three of their seven grandchildren. They purchased a home in the Four Seasons 55+ Community in Dumfries Virginia in May 2020. Kurt will be buried beside his parents, his grandparents, and all of his great-grandparents in the St. Peter Lutheran Cemetery in Holyrood, KS, later this spring. Those wishing to give a gift in his honor may send it to the St. Peter Lutheran Church, 209 S. County Road, Holyrood, KS 67450. Please indicate that your gift is In Memory of Kurt Frevert.

Kurt Frevert was the beloved husband of Anita Frevert for 53 years and the beloved father of Kurtis and Kevin Frevert. The tragic loss of this fine man will be carried in their hearts forever. Kurtis &#8220;Kurt&#8221; K. Frevert was born 11... View Obituary & Service Information

The family of Kurtis K. Frevert created this Life Tributes page to make it easy to share your memories.

Kurt Frevert was the beloved husband of Anita Frevert for 53...

Send flowers to the Frevert family.