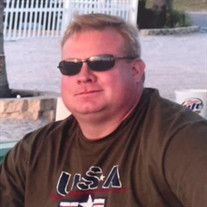 Kevin Alan Curry, age 50, lost his two-year struggle with colon cancer on February 21, 2022. He is survived by his wife, Paulette Butler, and sons, Blake Alexander, 20, and Paul John, 17, all of Manassas, VA. Kevin was born on July 24, 1971, in Punxsutawney, PA and graduated from Punxsutawney Area High School in 1989. He attended the University of Pittsburgh (main campus) where he studied criminology, graduating in 1993. Kevin met his wife of 27 years, Paulette Butler, while they both worked at Station Square in Pittsburgh. They soon traveled to Maryland, later settling in Virginia. During that time, Kevin worked for The Wackenhut Corporation (now G4S Secure Solutions) Anne Arundel County Jail, and the Arlington Deputy Sheriff before joining the Prince William Police Department. Kevin was a Master Police Officer with Prince William County Police Department for the past 24 years where he served as a patrol officer, a crime scene technician, a field training officer, and a K9 officer with his loyal partner, Briscoe. Kevin took great joy in watching his sons grow into the fine young men that they are. He spent many hours chatting with Blake as he worked on cars in the driveway and never missed one of Paul’s sporting events. Lately, Kevin took pride in teaching his sons how to shoot the various weapons he planned to leave to them. Kevin’s final words to his sons were telling them how very proud he is of the men they are becoming. Kevin is predeceased by his father, Jim A, Curry. He is survived by his mother Joyce (Dawson) Curry of Punxsutawney, Pa, and his brothers, Ken (Kelley) of Woodbridge, Jeff (Marie) of Bogart, GA, and Steve of Enola PA. Kevin is also survived by four nieces and three nephews. In lieu of flowers, the family asks you to consider a memorial donation to one of the following deserving organizations: Capital Area Law Enforcement Foundation, Police Benevolent Foundation, or Colon Cancer Coalition.

The family of Kevin Alan Curry created this Life Tributes page to make it easy to share your memories.

Send flowers to the Curry family.