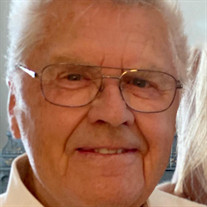 Kenneth French Parsons, a lifelong learner, entrepreneur, and a man whose passion for hard work, freedom, and family defined his life, joined his cherished wife in heaven on May 17, 2021. He was 88, surrounded by his tightknit family at his favorite spot, his Woodbridge, VA, home. Born in Portsmouth, NH, on Nov. 11, 1932, to Ruth Agnes French and Willis Malcolm Parsons, Parsons grew up in Kittery, Maine, with few resources but a solid family foundation. The value of hard work was ingrained in him at a young age as he spent time at the lumberyard and mill run by his grandfather and uncles. He was soon taking on newspaper routes and lawn mowing jobs with a work ethic that drove him to toil well beyond sunset, aided by the portable light he strapped to his mower. Later, he launched a “hot dog bus” to sell food to hungry patrons every day at the beach, sometimes dragging his sister along to help eat the profits. Parsons graduated high school from R.W. Traip Academy before attending Boston University and graduating from the University of Maryland with a Bachelor of Arts in the College for Arts and Sciences. He joined the Naval Reserves in high school and had an Honorable discharge from the U.S. Navy and the U.S. Army with a Good Conduct Medal. He married the love of his life, Kathleen Ellen Parsons, on Sept. 5, 1959, and they were best friends and partners for 60 years until her death on May 9, 2020. After working for Ford Motor Company in his early career, Parsons’ entrepreneurial drive led him to grow several thriving businesses, including Parsons Tree and Landscape, Parsons Wewerka Landscape Contractors, Delmarva Bandag, and Parsons Farm - Independent Hill. This line of work gave him the opportunity to plant many trees throughout the Nation’s Capital that still stand among the monuments today. For him, the highlight was the Paper Birch Tree he installed at the gravesite of President John F. Kennedy in Arlington Cemetery. In this way and many others, Parsons proudly lived his love of America and freedom. A voracious reader, Parsons always had multiple books, a dictionary, and a Bible at his fingertips. He exercised daily and worked every day except the Sabbath. He put it all on the line – all day, every day. And he was every bit as generous as he was hard working. Parsons believed everyone had good intentions and only wanted others to have a chance. Parsons raised three children with Kathleen and was immensely supportive of his children’s accomplishments and a doting grandfather. He stayed in close contact with his extended family as well, and summer vacations and holidays were always large family affairs. He will be missed immensely by his family and the community where he left a legacy. He was a longtime and active member of the Washington D.C. Landscapers Association, a member of Franconia United Methodist Church, Franconia Va., and a member of Buckhall United Methodist Church, Manassas Va. In addition to his wife, he is reunited in heaven with his son, Kirk Edward Parsons, who died in 2017. He is survived by his son Kenneth Willis Parsons of Woodbridge; daughter Karen Ellen Phillips and her husband R. Scott Phillips of Richmond, Va.; granddaughter Virginia Quinn Phillips and grandson Grayson Scott Phillips of Richmond; Sister Linda P. Carson and her husband Duncan J. Carson of Kittery, Maine.; sister-in-law Margaret L. Kingsbury and her husband Larry L. Kingsbury of Stratham, N.H; and seven nieces and five nephews. A service and celebration of life for Kathleen and Kenneth will take place at 10:30 a.m. on May 27 at Pierce Funeral Home, Manassas, VA. Reception to follow. Family burial. Pallbearers are Kenneth W Parsons, R. Scott Phillips, Grayson S. Phillips, Charles E. Thomason Sr., Brian D. Carson, and Ransom J. Newkirk. In lieu of flowers, his family requests a donation to the Dementia Society of America or the Juvenile Diabetes Association. The family also extends a special thank you to nephew Brian Carson, whose support and care has been so valuable during this time.

Kenneth French Parsons, a lifelong learner, entrepreneur, and a man whose passion for hard work, freedom, and family defined his life, joined his cherished wife in heaven on May 17, 2021. He was 88, surrounded by his tightknit family at his... View Obituary & Service Information

The family of Kenneth French Parsons created this Life Tributes page to make it easy to share your memories.

Send flowers to the Parsons family.