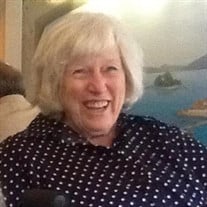 Katherine Wesley Quantrille of Bristow, VA, passed away Wednesday, January 27, 2021 at the age of 77 after a long battle with Parkinson’s disease and dementia. Kathy was born in Washington, DC on December 24, 1943, the daughter of the late Bertram W. and Gloria K. Keller. Kathy graduated from Camp Lejeune High School. She was married to James E. Gibson I for many years and later married the late Joseph C. Quantrille, who passed away on June 15, 2012. Known for her unconditional love, Kathy was a mother figure to many. She was a loving daughter, sister, wife, mother, grandmother, aunt, and friend. She was a homemaker and part-time bookkeeper. Her hobbies included bowling, playing cards, genealogy, and playing with her grandkids. Katherine had 4 siblings: brothers Bertram, Brian, the late John, and sister Susan. She is survived by her sons James E. Gibson II and Kevin W. Gibson, their wives Amy L. Gibson and Carissa N. Gibson, and her step-children Michael Quantrille and Michelle Taggart. She was blessed with 4 grandchildren (Hayley, Jake, Logan, Aiden) and many nieces and nephews (Brian, Jenna, Marissa, John, Cory, Kody, Alesha). Services will be held at a future date to be determined. In lieu of flowers, please make a donation In Loving Memory of Katherine Quantrille to The Parkinson's Foundation at 200 SE 1st Street, Suite 800, Miami, FL 33131 or online at www.parkinson.org, or the Michael J Fox Foundation at Donation Processing, The Michael J. Fox Foundation, P.O. Box 5014 Hagerstown, MD 21741-5014 or online at www.michaeljfox.org

Katherine Wesley Quantrille of Bristow, VA, passed away Wednesday, January 27, 2021 at the age of 77 after a long battle with Parkinson&#8217;s disease and dementia. Kathy was born in Washington, DC on December 24, 1943, the daughter of the... View Obituary & Service Information

The family of Katherine Wesley Quantrille created this Life Tributes page to make it easy to share your memories.

Send flowers to the Quantrille family.