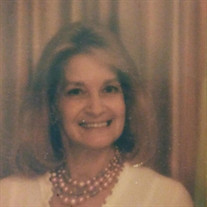 Katherine Wehrle-Walker Magelitz, 87, of Manassas, Virginia passed away Friday, March 12, 2021 at Prince William Hospital under hospice care. She was born as Mauda May Burgess, aka Katherine, on January 2, 1934 in Vandever, Tennessee, an in-home birth to the late Fred and Liza Burgess. Katherine was later adopted by the late Helen Wehrle and Zena Walker of Crossville, TN. Katherine was known as little Mazie to all who knew her during her childhood years. Katherine’s biological mother sadly passed away when Katherine was two, leaving her father with four children. Helen Wehrle and Zena Walker, missionaries were sent to the region by the Tennessee Valley Authority to help with families particularly affected by the Great Depression. Their prime concern was to aide families with needed supplies and possible shelters. The two missionary women, after many visits to the Burgess home, became very familiar with the family. At the age of three, Helen discovered Mazie had a large lump on her back. Permission was granted to remove Mazie from the home for doctor’s visits; this started the godsend journey of Mazie’s life. It was discovered Mazie had contracted TB through birth affecting her spine. After a unique operation of removing a portion of her shin bone to replace two vertebrae in her spine, Mazie spent many years in the hospital, even starting school from her hospital bed. Once Mazie was healed and released from the hospital, she went on to live an active life competing in roller skating competitions and taking piano lessons. The process of adoption started when Mazie was released from the hospital. The name then change to Katherine Wehrle-Walker. Katherine attended and graduated from the Cumberland County, TN school system. Katherine went on to earn a nursing degree through Memorial Mission School of Nursing located in Asheville, NC, graduating in 1957. Katherine’s nursing career spanned 46 years. Katherine retired in 2003 from Prince William Hospital after serving a dedicated 30 years. Katherine’s mission in life was of compassion, comfort and love. Katherine felt love as a condition where another person’s comfort and happiness is essential to one’s own happiness. Katherine also felt that sincere affection and words of hope would give one wings to the soul. Katherine devoted most of her life to her nursing career. Katherine was also a loving wife, mother, grandmother, great-grandmother and a good friend to many. Katherine Wehrle-Walker Magelitz is survived by two daughters, Cynthia K. Magelitz of Berkeley Springs, WV and Elaine P. Deursch and husband Dave of Winchester, VA; six grandchildren and eight great grandchildren. Katherine is preceded in death by two children Donald J. Magelitz, Jr. and Elizabeth Anne Magelitz Wilson Dobosi and by her late husband Donald J. Magelitz, Sr. The family will receive friends on Friday, March 26, 2021 at Pierce Funeral Home, 9609 Center Street, Manassas, VA from 10:00am until 11:00am at which time funeral services will be conducted. Burial service to follow at Stonewall Memory Gardens, 12004 Lee Highway, Manassas, VA 20109.

Katherine Wehrle-Walker Magelitz, 87, of Manassas, Virginia passed away Friday, March 12, 2021 at Prince William Hospital under hospice care. She was born as Mauda May Burgess, aka Katherine, on January 2, 1934 in Vandever, Tennessee, an... View Obituary & Service Information

The family of Katherine Wehrle-Walker Magelitz created this Life Tributes page to make it easy to share your memories.

Send flowers to the Magelitz family.