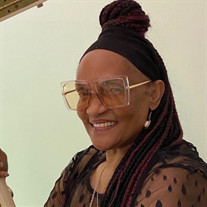 Karen Regina Lynch-Patterson, 70 of Manassas, VA gained her Heavenly wings on February 20, 2022. She was preceded in death by her mother Florence Lynch, father Howard Lynch; Siblings; Brenda Lynch, Charlotte Lynch, Don Lynch, Zelda Lynch, Manuel Lynch, Taft Lynch, Fenroy Lynch; Grandchildren, Je’Sani Smith, and Te’Zhon Davis. She is survived by her three daughters Carlotta Lynch-Ridley (LaDon Ridley) of Kentucky, Otilia Toler (Will Toler) of Florida, and Kiwana Denson (Terrance Denson) of Texas; Grandchildren, Kara Carter (Terrus Carter) of Minnesota, DéRecco Lynch of Maryland, Alexis Tyler of South Carolina, Kariah Davis of Florida, and Isaiah Davis of Minnesota, Terrance “TJ” Denson, Jr. of Texas; Great-grandchildren, Zamaria, Zhonte’, ZeLeon and ZaKyan, Sisters: Delmarie Lynch of Maryland, Dolores Harris of Maryland, Helena Johnson of Texas, and brother, Charles Lynch (Linda Lynch) of Texas and her granddog, Blackie. Karen also leaves behind to mourn a host of nieces, nephews, cousins, and friends. Karen was known as “Granny” and “Betsy” in the community. At the core, Karen believed in bringing light to everyone's life. Although not a licensed therapist or medical doctor, she always had the right advice and remedy to make you feel better. She loved to dance, and groove to old school and new school music. As the baby girl in the family, Karen spent much of her life dedicated to keeping the foundation of the Lynch family together, by remaining in WV close to her parents and baby brother Fenny. She raised her grandson DéRecco and played a major role in raising her grandchildren and great-grandchildren which created an unbreakable bond. She spent the latter part of her life in Manassas, VA right across the street from her daughter, son-in-law, grandchildren, and great-grandchildren. Karen remained authentically who she was, because even during this season of her life she was welcoming to everyone. It didn’t take her very long to add to her friends list, because she never met a stranger. Throughout the pandemic, Karen spent much of her time quarantining with her daughters, sons-in-law, grandkids, and great-grandchildren. Although we were encouraged to restrict closeness during this time, she felt it necessary to be close to the ones she loved. She valued the connection she had with her family and truly served as the glue that held them together. Karen celebrated her 70th birthday this year (January 15th) in Tampa, Florida with close family and friends. She was always known to be the life of the party, would open her doors for anyone who needed help, touched the lives of many, and was proud to be “A Coal Miner’s Daughter”. Her vibrant laugh, infectious smile, love for people, and kindness will be missed. A funeral service will be held for Karen from 11:00 AM until 12:30 PM on Sunday, February 27, 2022 at Pierce Funeral Home (9609 Center Street, Manassas, Virginia 20110). Her burial will take place at 1:00 PM on Monday February 28, 2022 at Spring Hill Cemetery (1555 Farnsworth Drive, Charleston, West Virginia, 25301).

The family of Karen Regina Lynch-Patterson created this Life Tributes page to make it easy to share your memories.

Send flowers to the Lynch-Patterson family.