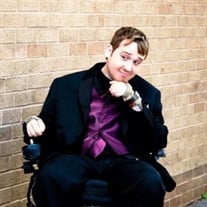 Justin Joseph Esposito 1978 – 2021 Justin Joseph Esposito passed into glory on October 19, 2021 at the age of 43. We deeply grieve, but not without hope, knowing that he is with his Lord and Savior Jesus Christ, all his grandparents, some relatives, friends, and mentors. He is survived by his parents, Joseph and Patty Esposito, his brothers, Daniel and Mark, and sisters, Janelle and Amy. Also feeling this loss are aunts and uncles, cousins and friends. After graduating from Osbourn Park High School in 1996, Justin attended college briefly but in Janary 1999 he was involved in a car accident that left him a high level quadriplegic. Shortly after the accident, he rededicated his life to the Lord and has lived a very full and abundant life, despite his limitations. Although Justin was not an ordained minister, he served the church and church leaders in many ways. He piloted an intercessory prayer group called the Watch since 2007. And he was also involved with several prayer initiatives, praying for his city, state, country and world. Justin was one of the main coordinators of the National Day of Prayer in Manassas for the last five years, which was held at the Harris Pavilion in Old Town Manassass. He had a passion to see the Body of Christ come together and worked diligently and even administratively to see that happen. A friend to so many, he deeply felt the pain of others and carried many in his prayer life, as well as reaching out on a personal level. He had an acute ability to make each friend feel as if they were the most important person in the world. Justin deeply impressed so many, because he did not feel sorry for himself and always thought of others. The services for Justin are as follows: Viewing Wednesday October 27th 6-9 pm Pierce Funeral Home 9609 Center Street Manassas, Va 20110 Celebration of Life Thursday October 28th 10 am Chapel Springs Church 11500 New Life Way Bristow, Va 20136 Possible Zoom Grave Site Old Town Manassas 9317 Center Street Reception following at Chapel Springs Church In lieu of flowers, donations may be made to Samantha’s Purse, to help victims of disasters.or Good News Jail Ministry.

The family of Justin Joseph Esposito created this Life Tributes page to make it easy to share your memories.

Send flowers to the Esposito family.