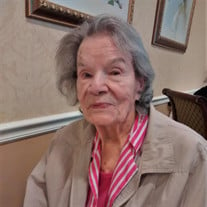 Juanita Bliven of Springfield, Virginia died peacefully – after a valiant struggle with dementia while in her 90s and the debilitating effects of recent falls – on Wednesday, March 24, 2021, in her apartment in the Brightview Baldwin Park assisted living community in Staunton, Virginia at the tender age of 98. Juanita is survived by her 2 children, Lorayne Bliven Blacka Summers of Purcellville, Virginia, and Neal Wayne Bliven of Rockville MD; 2 grandchildren; 5 great-grandchildren; and 1 great-great grandchild. She is also survived by her niece Susan Gatlin Bressler, her nephew John Gatlin Jr, and the children of her brother James Marvin Mudd, Jr. Juanita is preceded in death by her husband Wayne C. Bliven; a great grandson Patrick R. Clavijo; her sister Helen Gatlin; and her brother James Marvin Mudd Jr. Juanita was born on January 19, 1923 in Gibson, North Carolina to James Marvin Mudd Sr. and Helena (Lena) M. Neal. She grew up in southern North Carolina and finished high school in Scotland County, North Carolina. Upon graduation in the early 1940s, she was motivated to move to Washington, D.C. by First Lady Eleanor Roosevelt and others gearing up for the World War II effort. At age 19 she joined the Civil Service in Washington, D.C. and found employment as a clerk and later as a secretary to Civil Service professionals in the U.S. Government. Initially, she worked as a mail clerk with the Office of Civil Defense (OCD), where she was able to enjoy occasional interaction with Eleanor Roosevelt, then Co-chair of the Office of Civilian Defense (OCD), which was created to help civilian volunteers perform expanded roles in war preparations. As one of the original World War II “Government Girls,” Juanita had many friends and colleagues in the Washington D.C. area. She enjoyed its social life in USO dances as well as jazz and big band shows at night clubs in Washington D.C. and New York City. After the war, Juanita held various secretarial positions with the U.S. Department of Agriculture. At that time, Civil Service secretaries, who were mostly women, were much more than lowly file clerks and typists; many of them, including Juanita, rose to perform important administrative assistant and office management functions for their bosses. She had excellent typing, shorthand, language, and organizational skills. Juanita’s last secretarial jobs were with agricultural economists in the U.S. Department of Agriculture. In 1954, Juanita married a young sailor from the Midwest named Wayne C. Bliven, who had been assigned to the Washington D.C. area during his 9-year career in the U.S. Navy (Submarine Service). Two children quickly entered the picture, and her husband’s Navy assignment took them to Hawaii for a brief period in the 1950s. After her husband received his honorable discharge from the Navy, they returned to Washington, D.C. where both took on civilian Federal Government jobs. She retired from U.S. Government service in 1967 and devoted her time in the late ‘60s to her family and community service. Later, she worked as a secretary and administrative assistant for a Campbell Soup Company regional sales office. After her children flew from the nest, she worked at the headquarters office of the National Council on Aging in the ‘80s and ‘90s, where she supported professionals building and implementing programs to support older Americans. She retired for the last time at age 70, after a long career of hard work and service. During her life Juanita enjoyed socializing, going to concerts and musicals with family and friends, and spending time with friends and neighbors. She could be a vivacious host. She was also very sharp and perceptive; you couldn’t get any nonsense past her, as her children and grandchildren can attest. She enjoyed sharing the management of house and property with her husband as long as she was able, and she was involved in local politics, school, and community activities. She encouraged her children to work hard, get a good education, and keep learning. Even up to age 90, Juanita was active physically and mentally – taking daily walks and staying fit, keeping up with the news, reading, discussing politics and community concerns, and managing the family files and correspondence just as well as she had done in her previous professional life. Due to age and deteriorating health, Juanita and Wayne left their 50+ year old home in Springfield, Virginia in early 2015, and moved to assisted living. It was a tough transition, but they finally found a wonderful, caring environment in the Brightview Baldwin Park assisted living community in the beautiful Shenandoah Valley. Juanita lost her husband Wayne in January 2020. She lived the rest of her days as a widow who brightened the hallways of her assisted living community. Even through the COVID-19 pandemic and several falls, she stayed infection-free and capable of having family visits when some restrictions were lifted. She even her got her 2 doses of the COVID-19 vaccine. Due to COVID-19 restrictions, a memorial funeral service will be delayed for both Juanita and her husband Wayne. A joint service will be held for them in 6 to 12 months, as soon as services can be scheduled with Arlington National Cemetery and friends and relatives can be contacted. They were together for 66 years in life, and soon their remains will be side by side in a beautiful location in Northern Virginia overlooking the Potomac River and Washington, D.C. – the center point of their lives together. The family would like to thank the staff of Brightview Baldwin Park and Augusta Health’s Hospice of the Shenandoah for their loving support during Juanita’s final days.

Juanita Bliven of Springfield, Virginia died peacefully &#8211; after a valiant struggle with dementia while in her 90s and the debilitating effects of recent falls &#8211; on Wednesday, March 24, 2021, in her apartment in the Brightview Baldwin... View Obituary & Service Information

The family of Juanita M. Bliven created this Life Tributes page to make it easy to share your memories.

Send flowers to the Bliven family.