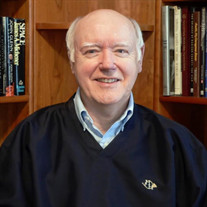 Joseph L. Headlee, 88, of Gainesville, VA, peacefully passed away from Alzheimer's on June 4, 2022. Joe was born on March 26, 1934, to Joseph L. Headlee and Frankie Elanor Boor Headlee in Waynesburg, PA. After graduating with a Bachelor of Arts degree from Waynesburg College, in 1956, he married his high school sweetheart, Dolores Dukate of Waynesburg, PA, and joined the Army, where he served as the head television producer at AFKN-television in Seoul, Korea, from 1957-1958. Joe then worked as a producer and director at the U.S. Army Pictorial Center in New York City for a year before being discharged from the Army and heading to Boston. He served as producer and director at WBZ-television station for three years, directing children's programming. In 1962, his only son Joel was born in Boston, MA. In 1963, Joe packed up his wife and toddler and headed to Pasadena, CA, where he worked for NASA's Jet Propulsion Laboratory for three years before being called back to NASA Headquarters to become its Chief of the Broadcast and Imaging Branch in Washington, D.C. From the Apollo program to the shuttle program, launches to landings, Joe brought the excitement and wonder of human spaceflight and scientific discoveries into homes worldwide and helped make NASA a household name. In 1968 his only daughter Dena was born, and the family called Springfield, VA home for 35 years. In 1985, Joe received Boston University's College of Communication Distinguished Alumni of the year award. In 2000, Joe and Dolores retired to Gainesville, VA. While he might have retired from civil service, Joe was far from ready to hang up his director's hat. He went on to work for a Fairfax County Public Television show called "Parks Plus." He spent days traveling to different local parks to shoot and edit video stories about each park's activities. After seven years of producing Parks Plus episodes, Joe hung up his hat and picked up his golf clubs. He spent his retirement days with friends on the Heritage Hunt golf course when he wasn't chasing after his grandkids. Joe was predeceased by sister Shirlee H. Milliken of Waynesburg, PA, and his son Joel L. Headlee of Phoenix, AZ. He is survived by his wife Dolores D. Headlee, of Gainesville, VA; his daughter Dena Headlee-Lymburner of Centreville, VA; his sister Karen H. Bogucki of Carmichaels, PA; one granddaughter, Megan E. Lymburner; and one grandson, Nicholas R. Lymburner. A graveside service will be held at the Stonewall Memory Gardens at 12004 Lee Hwy, in Manassas, VA, on June 18, 2022, at 2:00 pm.

Joseph L. Headlee, 88, of Gainesville, VA, peacefully passed away from Alzheimer's on June 4, 2022. Joe was born on March 26, 1934, to Joseph L. Headlee and Frankie Elanor Boor Headlee in Waynesburg, PA. After graduating with a Bachelor of... View Obituary & Service Information

The family of Joseph L. Headlee Jr. created this Life Tributes page to make it easy to share your memories.

Send flowers to the Headlee family.