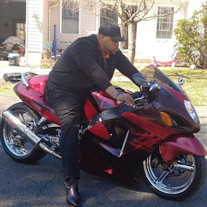 Jontae Langston Spinner was born in Alexandria, Virginia on January 22, 1982 to the Spinner family, parents Rickey & Debra and Sister, Latisha. He departed this life peacefully at home on February 15, 2022. The Spinner family relocated to Haymarket, Virginia when Jontae was 3 years old, Manassas at age 10 and later Centreville, Virginia only to return to Haymarket 29 years later. During his grade school years, Jontae attended Tyler Elementary and Westgate Elementary. In Centreville he went to Stone Middle and graduated from Centreville High School where he made life long friends. During and after high school Jontae worked at Sk8 N Fun Zone where he skated more than worked and Jiffy Lube of Centerville where he initially learned automotive skills. Jontae joined the Fairfax County workforce and was a dedicated employee of Fairfax County for 18 years where he received Outstanding Performance Awards year after year. He was an avid drag racing fan from race tracks across the DMV, Old Dominion Raceway; Sumerduck Dragway and Maryland International Raceway (MIR). Jontae later became the Crew Chief for EB3 Motorsports with whom he traveled everywhere! He loved his racing family. Jontae loved rollerskating, fishing, riding his motorcycle (Shug), playing Spades and spending time with friends and family. Children were drawn to him with that friendly smile and gentle “giant” stature. His one true passion was weight lifting and was a member of Retro Fitness gym for many years. Jontae was a one of kind man! He touched everyone he ever came across! He knew everyone and everywhere he went, he saw someone he knew! It was unbelievable! And if he didn’t know you…he would and you would know him because he talked to anyone about anything and usually started out by saying something to make them smile or laugh. EVERYONE LOVED HIM! Jontae was preceded in death by Grandfathers, Melvin Boyd & Howard King; Grandmothers, Arleatha Campbell & Norma Byrd; Aunt, Donna “Pebbles”Steppe and in-law, Micah Bushrod Sr. Jontae’s memory will be cherished by his fiancé Becky; parents, Rickey & Debbie; sister Tish; brother Erik (Jessica); nephews, Jeremy & Josh; 5 Uncles, “Unc (Jr)”, “Uncle Finney”, “Uncle BooBoo”(Aunt Karen), Uncle Michael (“Shorty”) and “Uncle Bam” (Aunt Angie) King; 2 Aunts, Aunt Margaret and “Aunt Peanut Butter” Roxanne; Grandfather “Butch”, his God-siblings, Kayla & DeVonte “Mu” and a host of Cousins who love him dearly. He is also survived by his Bushrod & Cupp in-laws, Linda, Mike Jr (Nancy), Winnie (Jamie) and Andre. Loving memories will also be shared amongst his Fairfax County, EB3, Centreville Families; as well as His close “Brothers” Steve, Daryl, David, Jaz, Rooter, Nony, Ev, AJ; and so many special Friends.

The family of Jontae Langston Spinner created this Life Tributes page to make it easy to share your memories.

Jontae Langston Spinner was born in Alexandria, Virginia on January...

Send flowers to the Spinner family.