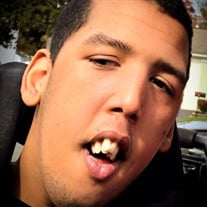 Jonathan Alexander Nadal was called to his heavenly home on Friday, October 8, 2021, at the age of 21 years. He was an amazing and remarkable individual who lived resiliently, defying great odds his entire life, commencing with his miracle entry into this world on October 18, 1999, at only 26 weeks of gestational age. Despite his life challenges, he never let these define him nor complain about them. He was uniquely gifted but did not concern himself with comparison mirroring self-acceptance through his tenacity and motivation. He had a healthy and robust competitive spirit well noted among his peers and observed by his teachers at Osbourn Park High School, especially in his Adapted Physical Education classroom. This was also on full display at home during family games and winter sport rivalries. Cleveland Browns versus Pittsburgh Steelers football games made for the most contentious. Of course, he was a Browns fan by default. Jonathan was very expressive. Despite verbal communication challenges, he had a ‘voice’ and creative ways to use it. Most recently, he was honing skills in communication via an augmentative communication device which utilized his eye gaze to select icons. The promised benefit of control of thought was obviously well worth the significant eye strain which resulted from the use of his eye muscles in this way. Those who knew Jonathan also appreciated his other forms of expression. Perhaps most well-known was his infectious smile. Jonathan had a great sense of humor as evidenced by his choice of movies; an occasion to mischief; or his contagious squeal of delight/laughter. He especially enjoyed laughing when witnessing a mishap, such as a teacher having AV problems in her virtual classroom, or, when younger, in situations when his older siblings got into trouble. Jonathan was compassionate and had a thoughtful and generous spirit. He loved to make people happy or share a gratitude via the giving of gifts. He exhibited a sense of industriousness when undertaking the responsibilities of currying attendance to the office from his classroom. He enjoyed the attention and encouragement he received in his relationships. He inspired his family, and others, regarding the true meaning of love and unconditional acceptance. He increased our hearts’ capacities for extending the same to each other and even those outside of our family. We are bonded together in ways that could only be the result of a life shared with Jonathan. He is, and will be, greatly missed. Jonathan is survived by his mother, Kathryn Ann (Dahlkemper) Nadal, his father, Leonardo Adolfo Nadal, Sr., his brothers Leonardo Adolfo Nadal, Jr. (LJ), and Miguel Antonio Nadal. He was proceeded in death by his older brother Gabriel Daniel Nadal. Please join us for a celebration of Jonathan’s life on Monday, October 18, 2021 (his birthday) at the Pierce Funeral Home. There will be a period of visitation at 10 am followed by a service there at 11 am. There will also be a time of fellowship and light refreshment directly after the service.

Jonathan Alexander Nadal was called to his heavenly home on Friday, October 8, 2021, at the age of 21 years. He was an amazing and remarkable individual who lived resiliently, defying great odds his entire life, commencing with his miracle entry... View Obituary & Service Information

The family of Jonathan Alexander Nadal created this Life Tributes page to make it easy to share your memories.

Jonathan Alexander Nadal was called to his heavenly home on Friday,...

Send flowers to the Nadal family.