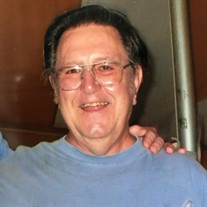 Jon Ivan Ketner of Sterling, VA tired and exhausted of lost balls on the sub-par golf courses and sand traps on earth, has departed on March 30, 2021 at the age of 80 for a tee time at the eternal golf course above with golden sands and lakes full of lunkers. Shedding the complications of diabetes, he has jumped into his truck with his golf clubs and boat in tow and is headed north. He graduated from Bethel High in Bethel, PA as President of the Senior class and was also named Captain of his soccer and baseball teams. He loved hunting and fishing with his brothers as a youngster in PA. After graduating he enlisted in the US Army in October of 1958, where he proudly served for 4 years. He then began a career with Western Electric (phone company) were he installed telecommunications equipment for 30 plus years. He was a proud member of Communication Workers of America (CWA) Local 2390 where he also served as a Representative for the members, then Vice-President and President of the Local. Living in Sterling, VA with his wife Dorothy Ketner and son Charles (Tater) Ketner, Jon thrived at the opportunity to stay involved in sports through coaching. Since retirement he has spent countless hours searching for the elusive perfect golf game and that trophy large mouth bass to drop back in the water for another day. There are numerous stories that detail these events, you only had to ask and he would always share the story of the one that got away, or the prefect shot from 250 yards out, “it’s in the hole!” Born on December 18, 1940 in Stouchsburg, PA in his family home, he was one of four boys to William George Ketner Sr. and Clara Priscilla (Fichthorn) Ketner who both preceded him in passing. Also preceding him in passing was his oldest brother William G. Ketner Jr. He is survived by brothers Percival (Pat) Ketner and Joe Ketner. There is a large extended family of aunts, uncles, cousins, nieces and nephews. Jon married Dorothy Jean (Saylor) Ketner for a second time on April 15, 1978. They remained in Sterling, VA where Dorothy passed on December 30, 1993 of Lung Cancer. Preceding Dorothy in passing was her oldest son Michael Wayne Coulter at age 29 due to a car accident in Kentucky; December 1988. Jon’s surviving legacy includes Charles W. Ketner (son), Wendy A. Ketner (wife of Charles) and their two children Nathan Michael Ketner and Erin Grace Ketner. Charles and his family reside in Nokesville, VA. Private services will be held for family and friends at Pierce Funeral Home on April 8, 2021 at 11am - 9609 Center Street Manassas, VA 20110. In lieu of flowers contributions can be made in honor of Jon I. Ketner to the Elks National Foundation, Veterans Fund ; https://secure.elks.org/site/Donation2;jsessionid=00000000.app20026a?1080.donation=form1&df_id=1080&mfc_pref=T&NONCE_TOKEN=FCF7608D5203F630179D48F1769E7A07

Jon Ivan Ketner of Sterling, VA tired and exhausted of lost balls on the sub-par golf courses and sand traps on earth, has departed on March 30, 2021 at the age of 80 for a tee time at the eternal golf course above with golden sands and lakes... View Obituary & Service Information

The family of Jon Ivan Ketner created this Life Tributes page to make it easy to share your memories.

Send flowers to the Ketner family.