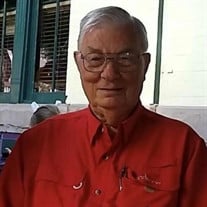 John Fredrick “Freddie” Wolfe, 88, of Brentsville, VA was called home by our Lord on Friday, June 18, 2021. He was surrounded by his family as he peacefully made his transition to join the Heavenly Choir of Angels. Freddie was predeceased by his wife, Hazel Stanley Wolfe; as well as his parents, Clyde Wolfe and Emma Smith Wolfe, and 8 older siblings. Survivors include his son, Cary Wolfe; daughter, Cathy White, and her husband, Richard; grandchildren, Jon Wolfe, Lauren White, and Richard “Trey” White, III; and great-grandson, Sebastian White. Freddie was a retired veteran of the US Army National Guard, survivor of the Korean War, and retired Electronics Technician at Marine Corps Base Quantico. He proudly spent his life serving our country, and was a model citizen and patriot. He was born in a humble home during the Great Depression in Brentsville on October 19, 1932, and purchased the house next door to raise his family in 1961. It was in his beloved home that he left this world to join our Father and his loved ones waiting for him in Heaven. He was a lover of nature, and spent most of his life as a hunter, fisherman, and gardener. Freddie was a family and community centered man, and was loved by all who knew him for his wisdom, as well as his humor. The family invites you to join Freddie’s celebration of life on Saturday, June 26, 2021 at 2:30 p.m. It will be held at Brentsville Presbyterian Church, followed by the interment at Valley View Cemetery in Nokesville. Flowers can be delivered to the Wolfe home (12205 Barbee Rd, Bristow, VA). In lieu of flowers, he would want donations made in his honor to Brentsville Presbyterian Church (P.O. Box 611, Bristow, VA 20136), where he has been a lifelong member.

John Fredrick &#8220;Freddie&#8221; Wolfe, 88, of Brentsville, VA was called home by our Lord on Friday, June 18, 2021. He was surrounded by his family as he peacefully made his transition to join the Heavenly Choir of Angels. Freddie was... View Obituary & Service Information

The family of John Frederick Wolfe created this Life Tributes page to make it easy to share your memories.

Send flowers to the Wolfe family.