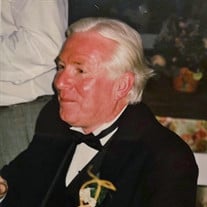 The Mackey family is saddened to report that John Patrick Mackey passed away on January 1, 2021 of cancer (unrelated to COVID.) He is survived by his wife of 56 years, Connie Mackey, and his two daughters Kristen Mackey and Kim Mackey Elliott and granddaughters Bailey Elizabeth, Haven Grace and Madeline. John graduated from North Shore High School in Glenwood, New York and received a degree in Business from Seton Hall University, followed by a law degree from the Fordham University School of Law. He was inducted into the FBI as a Special Agent and served at posts in Chicago, New York and San Francisco and graduated from the Defense Institute of Languages in Monterey, CA. He returned to NY to the law firm of Cullen and Dykman. He and Connie moved to Washington DC in 1974 working with the Ad Hoc Committee in Defense of Life before receiving a Presidential appointment to the Department of Justice, where he served as Deputy Assistant Attorney General under George H. Bush. In this capacity, John handled legislative affairs and the confirmations of Federal judges, including the Supreme Court and other key Justice Department nominees before the U.S. Senate. In his last 15 years of employment, he served as the Investigative Counsel for the House Foreign Affairs Committee, where he handled oversight inquiries and investigations as well as the issue of international terrorism, illicit narcotics control, and global organized crime. He played a major staff role in securing assistance for Colombia (Plan Colombia) for the successful fight against “narco terrorism” in America’s own hemisphere. As a proud Irishman, he had the opportunity to add the Irish/English peace plan to his portfolio as well. John was delighted to be a part of the Regency Men’s golf league and enjoyed many years of golf before poor health prevented his daily rounds. A Mass will be said at St. Stephen the Martyr Church in Middleburg, VA on Friday, January 15 at 11 a.m. The family will entertain friends and family (observing COVID regulations) for an open house at their home following the Mass from 1pm to 4pm. In lieu of flowers, donations can be made to John’s two charities listed below: Gabriel Homes, Inc. http://gabrielhomes.org/ American Cancer Society https://www.cancer.org/

The Mackey family is saddened to report that John Patrick Mackey passed away on January 1, 2021 of cancer (unrelated to COVID.) He is survived by his wife of 56 years, Connie Mackey, and his two daughters Kristen Mackey and Kim Mackey Elliott... View Obituary & Service Information

The family of John Patrick Mackey created this Life Tributes page to make it easy to share your memories.

The Mackey family is saddened to report that John Patrick Mackey...

Send flowers to the Mackey family.