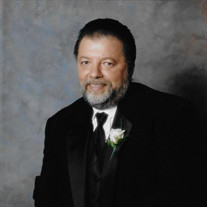 John J. Lampasona It is with deep sorrow and much love that we mourn the passing of our husband, father, grandpa (GP), and brother, John J. Lampasona, of Manassas, VA on October 2, 2021 at the age of 73. He now rests with Our Lord and his parents Carmelo and Filomena Lampasona. He was born on September 5, 1948 and raised in Brooklyn, NY where he made many lifelong friends and met the love of his life, Millie, to whom he was devoted and married to for 51 years. In the early years of their marriage he served in the US Army stationed at the Pentagon where his career in IT security was launched and the start of their family. John was a devoted Dad to his 4 children, and passionate GP to his 14 grandchildren and 1 great grandson. He loved them all from the bottom of his heart, they filled his life with joy. John was the greatest story teller and the glue that held the Lampasona family together and will be painfully missed by all. He was patriotic beyond measure, had great love of family and friends, and his generosity and kindness touched and left an instant impact on the lives of all he met. John had many hobbies and pastimes in his life. He owned an AKC kennel, breeding champion Akitas for several years, he loved motorcycling, and owned several motorbikes, one of which was custom made. He was an avid gun enthusiast licensed to sell, and buy firearms, and his collection of firearms was extensive to say the least. He fell in love with cowboy boots after a business trip to Texas and soon had an extensive boot collection of exotic animal skins. His favorite fashion was jeans and a black t-shirt that would have sayings that were offensive to some and funny to others, but usually political or patriotic in nature. However, his most favorite pastime was spending time with his family and friends, so much so that he purchased a 27 passenger bus so that his children, and grandchildren could all travel together to places like the annual pumpkin patch trip to Belvedere Plantation, snow tubing trips, a trip to New York City and the annual Santa train ride in Old Towne Manassas (where he would get in line at 4am to get enough tickets to take his grandchildren and other family friends and fill an entire train car). His grandchildren were truly his pride and joy and he was so proud of each of them. After John’s honorable discharge from the United States Army in 1971, he was hired by Georgetown University based on his strong IBM Mainframe background. In 1978 he followed his supervisor from Georgetown University to General Electric Aerospace in Springfield, VA. John worked in the intelligence community for over 37 years and was known as "Lampo" to everyone he met. He was a hard worker, and considered his co-workers an extension of his family. The last five years of his career he started and ran his own private Security business, until his retirement at the end of 2016. John will be lovingly remembered by his wife Millie, his 4 children John (Lisa) Lampasona, Tara (Shawn) Griese, Jessica (Ricky) Davila, Alexis (Victoria) Eddington-Hall, his 14 grandchildren Keith (Ashley) Griese, Kevin, Gabrielle & Natalia Griese, Vincent and Adrianna Lampasona, Allyson, Wyatt, & Ryan Eddington, Mackenzie and Emerson Hall, Gianna, Dominic, & Carmelo Davila, and 1 great-grandson, William Griese, his brother, Robert (Liz) Lampasona, his brother-in-law, Joseph (Pam) Masella, many cousins, nephews, nieces, and friends. Our love for John will endure. In lieu of flowers donations may be made to Saint Jude‘s or Tummy-YumYum (9119 Church Street, Manassas VA 20110) which is a local family run Candy Apple Business but more importantly provides meals for those in our community that need them and John would love to drop off donations to help her. Both of these organizations were near and dear to John. Live Streaming: https://youtu.be/SwIYI54dSec

John J. Lampasona It is with deep sorrow and much love that we mourn the passing of our husband, father, grandpa (GP), and brother, John J. Lampasona, of Manassas, VA on October 2, 2021 at the age of 73. He now rests with Our Lord and his... View Obituary & Service Information

The family of John Joseph Lampasona created this Life Tributes page to make it easy to share your memories.

It is with deep sorrow and much love that...

Send flowers to the Lampasona family.