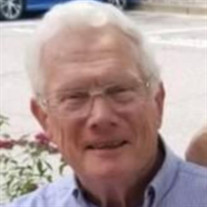 “I will live every day until I cannot live anymore.” And he did. John “Jack” Miller Kingston said these words regularly and lived them to the very end. Along with his abiding faith, John found his greatest joy and fulfillment as a devoted and beloved husband for nearly 59 years, as well as a committed and engaged father and grandfather. He always put family first. Born on August 20, 1937 to William & Louise Kingston in Beverly, New Jersey, he was one of “the boys” – four sons. He graduated from Drew University where he met the everlasting love of his life, Wendy, having their first date on Valentine’s Day 63 years ago. After serving as a US Army medic in Germany during the building of the Berlin Wall, he returned to the states, where he and Wendy settled in central New Jersey. They raised three children together in whom he was immensely proud. John was a compassionate and insightful high school guidance counselor at Cranford High School for 29 years. His direction and impact on many individuals is long-lasting and brought him deep happiness as he received notes of gratitude from many former students in recent years. During the course of his life he also earned two masters degrees in Counseling and Economics from Rutgers University and Montclair State University. Later in retirement he and Wendy moved to Gainesville, VA to be closer to their daughter and granddaughter. John was a man of deep faith who was very involved his parishes wherever he & Wendy lived. Most recently he was an active member of The Grace (Episcopal) Church in The Plains, VA. His faith brought great meaning and direction to his life and his approach to the world around him. John was a true people person with a great mind and a quick humor. He was admired and respected by peers, colleagues and friends. John was also an avid gardener, known for the beauty of his flowers and abundance of his vegetables. As an educator, he imparted his love for education and reading to his children and students. Throughout his years he was actively involved in the Boy Scouts and enjoyed simple pleasures like the daily crossword puzzle and time spent at the beach. During his retirement, he returned to his love of art from his youth, taking classes and enjoying painting. Art became a special bond between John and his granddaughter. In recent years, John was an active member of “Men in Song”, a men’s chorus that performed locally; some of his fondest moments from the chorus involved grandfather-granddaughter “duets” where he would sing a solo and she would dance in the chorus’ annual holiday show. In his last 18 months he fought a valiant battle with dignity and grace, beating many odds. When that was no longer possible, he passed away quickly and painlessly with his wife present. John is predeceased by his parents, William and Louise, and his brothers, William and Albert. He is survived by his wife Wendy (Robinson), his sons Mark and Peter, daughter, Robin Salsberry (Robert), granddaughter, Carina and brother David (Maryann). He will be deeply missed, but the love and legacy he has left will live on in the hearts of all he touched. Due to COVID, a private burial will be held. The family plans to hold a memorial service at Grace Church when the pandemic is less of a concern to celebrate John’s life and wisdom he taught us, to live every day until we cannot live anymore.

&#8220;I will live every day until I cannot live anymore.&#8221; And he did. John &#8220;Jack&#8221; Miller Kingston said these words regularly and lived them to the very end. Along with his abiding faith, John found his greatest joy and... View Obituary & Service Information

The family of John Miller Kingston created this Life Tributes page to make it easy to share your memories.

“I will live every day until I cannot live anymore.” And he did....

Send flowers to the Kingston family.