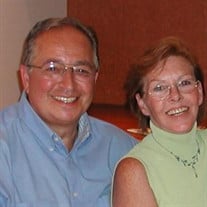 John Gabriel Guarino, 76, of Gainesville, Virginia, passed away on Saturday, January 1, 2022. Born in Queens, New York in 1945, he was a graduate of St Johns’ Catholic School. He then earned a Bachelor of Science in Financial Accounting from the New York Institute of Technology. He began his career working for AT&T in New York City where he met his beloved wife, Linda. He retired as a Financial Accounting Manager after working for many telecom companies in the Tri-State Area. In his younger years, he was an altar boy and would often be found playing roller hockey, stick ball and baseball but his fondest memories were his summers spent on the Long Island Sound with his brother Joe, his cousins and family. John was a proud Army Veteran who served as a Blackhawk in the 7th Armored Squadron, 1st Air Cavalry in the Vietnam War. He was the ultimate family man who supported his wife, son, and friends fiercely. Whether it be Linda’s desire to open a floral business or bring home one of her many animals, he always smiled and supported her. John was an active member in the community as a volunteer EMT for the Warren Township (NJ) Rescue Squad and spent countless years as baseball coach where he passed along his love of the game to his son. The love of the game was a strong bond between him and his son, Jonas. In his later years, he loved spending every moment he could around his grandkids. From picking them up from school to attending almost every one of their baseball games, he was and will always be their biggest fan. He is survived by: Linda Guarino (Wife) of Gainesville, Virginia Jonas Gabriel Guarino (Son) of Clifton, Virginia Victoria Guarino (Daughter in-law) Brayden Guarino (Grandson), 9 years old Carter Guarino (Grandson), 7 years old Harper Guarino (Granddaughter), 3 years old Joseph Guarino (Brother) of Long Island City, New York Nadine Guarino (Sister in-law) Nicole Miranda (Niece) of Coro de Casa, California A funeral mass will be held at St Timothy’s Catholic Church in Chantilly, Virginia on Wednesday January 12th, starting at 1:00pm The family asked that in lieu of flowers, donations in John’s name may be made to either The St Jude Foundation https://www.stjude.org/ The Tunnel to Towers Foundation (https://t2t.org/

John Gabriel Guarino, 76, of Gainesville, Virginia, passed away on Saturday, January 1, 2022. Born in Queens, New York in 1945, he was a graduate of St Johns&#8217; Catholic School. He then earned a Bachelor of Science in Financial Accounting... View Obituary & Service Information

The family of John Gabriel Guarino created this Life Tributes page to make it easy to share your memories.

Send flowers to the Guarino family.