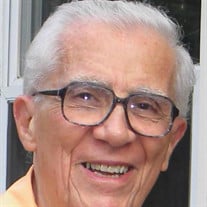 Deacon John William Eberlein passed away peacefully in his sleep on the evening of May 10th at his home. He was born on August 14, 1932 to William “John” Eberlein and Margaret Prizinsky in Erie, Pa. John served four years honorably in the U.S. Air Force from 1952-1956 during the Korean conflict. After his discharge from Military service, he pursued further education at Gannon University where he graduated with his Bachelor's Degree in Accounting. He married the love of his life, Shirley Ann Nareau on February 11, 1956 and they enjoyed 51 years of marriage up until her passing. He was Ordained a Catholic Deacon on March 11, 1974 and spent the next 47 years spreading the word of the Lord to his congregants, friends, family and even strangers; He would always tell people “How great our Lord is”! He was a humble man with an unwavering devotion to his faith and family. He found great fulfillment in devoting much of his time to the community and his church, enjoying his sports teams, The Washington Capitals, Redskins and Nationals, watching the horse races, as well as enjoying his movies. Oh, how he loved his musicals! Most of the people he met, at some point probably heard a story from him relating to some of his most loved movies and how they related to life. He loved life and loved engaging with people, talking about God, sports or life in general. He never met a person he couldn’t strike up a conversation with and never had a bad word to say about anyone. As time went by and he grew older and wearier, knowing his time on earth could be limited, and someone would ask him how he was doing, he would say “My bags are packed”, and that he was ready when our Heavenly Father called him up. I can see God telling him now, “My precious son, it’s time for you to unpack your bags, you’re home now”. John was predeceased by his spouse Shirley Eberlein, sister Kathryn Mckenrick, niece Katy Anke, nephew Gary King, nephew Steven McKenrick, and grandson Michael Eberlein. He is survived by his five children; Paul Eberlein of Manassas, Va., Marcella Bradshaw and husband Jim of Moyock, N.C., Vincent Eberlein and wife Mari of Winterhaven, Fl., Gerard Eberlein and wife Pam of Fredericksburg, Va., And Valerie Corliss of Manassas, Va., seven grandchildren, two great grandchildren, his siblings Bill Eberlein and wife Barbara, Thomas Eberlein and wife Lucille, Sally Kolbas and husband Mike, Joanie Peterson and husband Jerry and Diane Anke and husband Jack and numerous nieces and nephews. Deacon Eberlein’s family will receive visitors at Pierce Funeral Home and Cremation Service, 9609 Center St., Manassas, VA on Wednesday, May 19, 2021 from 5:00-8:00 PM. Mass of Christian Burial will be celebrated on Thursday, May 20, 2021 at 11:00 AM at All Saints Catholic Church, 9300 Stonewall Rd., Manassas, VA. Interment to follow at Fairfax Memorial Park. In lieu of flowers the family suggest donations be made to a Catholic Church Pro Life Organization.

Deacon John William Eberlein passed away peacefully in his sleep on the evening of May 10th at his home. He was born on August 14, 1932 to William &#8220;John&#8221; Eberlein and Margaret Prizinsky in Erie, Pa. John served four years honorably... View Obituary & Service Information

The family of John W. Eberlein created this Life Tributes page to make it easy to share your memories.

Deacon John William Eberlein passed away peacefully in his sleep...

Send flowers to the Eberlein family.