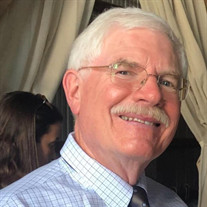 John Thomas Bailey, 72, of Manassas, passed away peacefully on April 23, 2021. He was surrounded by his wife and sons. John was born on October 17, 1948, to Helen and Jordan Bailey at Camp Pendleton in California. After graduating from Woodbridge High School in 1966, he attended Virginia Military Institute. He graduated in 1970 with a Bachelor of Science in Civil Engineering. John was devoted to his Brother Rats who were lifelong friends, travel companions and beach buddies. After graduation, he served in the Marine Corp for three years. John’s first civilian job was as a civil engineer at the Prince William County Service Authority, where he worked from 1973 until his retirement in 2011. In 1974 he met June, and they wed in 1977. He was a loving husband who worked hard to support his family. They had three boys, Wes, John, and Patrick. Together, June and John spent many years cheering for their sons in all their athletic endeavors. He took pride in his sons, and loved their wives Stephanie, Kristin, and Meghan, as well. John was happiest doting on his young grandsons, Jackson, and William. John was also a caring uncle and godfather, and a loyal friend to many. He enjoyed fishing on canoe trips, golfing, and yard work. He took pride in immaculately blowing leaves and was extraordinarily detail oriented. He was a big milk-drinker, green vegetable avoider, and made sure the garbage can was never full. One of John’s biggest passions was planning for and developing his property in Harrisonburg with his late brother Carl. John was quiet and reserved with a subtle sense of humor. Although he was technologically challenged and kept paper copies of everything (in duplicate), which some may call “old school,” he appreciated the technology of FaceTime which kept him connected to family and friends near and far. A viewing will be held at Pierce Funeral Home in Manassas, on Sunday May 2, 2021 from 4-6pm. Interment will be at Quantico Marine Corp Base at a later date. The family requests that in lieu of flowers, donations be made to MedStar Georgetown University Hospital ICU in John’s name. We are so grateful for the care and compassion that he received during his stay there. Donations can be made at the following web address: https://www.giving.medstarhealth.org/inmemoryofjohnthomasbailey There will be a celebration of John’s life later this summer in Manassas; information to follow.

John Thomas Bailey, 72, of Manassas, passed away peacefully on April 23, 2021. He was surrounded by his wife and sons. John was born on October 17, 1948, to Helen and Jordan Bailey at Camp Pendleton in California. After graduating from Woodbridge... View Obituary & Service Information

The family of John Thomas Bailey created this Life Tributes page to make it easy to share your memories.

John Thomas Bailey, 72, of Manassas, passed away peacefully on...

Send flowers to the Bailey family.