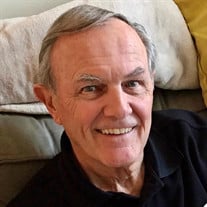 Jerry J. Surbey, Captain, U.S. Coast Guard (Retired) September 22, 1941 - February 22, 2022 In loving memory of Capt. Jerry James Surbey (Ret.) of Gainesville, VA, and native of North Canton, OH; beloved husband of Rebecca A. Surbey for more than 57 years; devoted father to Brett J. Surbey (Maureen Boland) of Fairfax, VA, Jason D. Surbey of Arlington, VA, and Blake A. Surbey (Sarah Schwartz) also of Arlington, VA; and beloved grandfather to Nora, Anna, Bevin, Harper and Jude. Jerry Surbey was born to the late James C. and Mary C. Surbey in Canton, OH, and is preceded in death by his younger sister Joyce Leverone of Bradenton, Florida. He is survived by younger sisters Susan L. Johnson of San Diego, CA, and Barbara J. “Bobbie” Surbey of Albuquerque, NM. Jerry attended the U.S. Coast Guard Academy in New London, CT, and was commissioned as an Ensign in 1964. After finishing his first assignment on a Coast Guard Cutter in Norfolk, VA, he attended flight training at the U.S Naval Air Station Pensacola in Florida, also known as “the cradle of Naval Aviation.” After earning his wings in 1967, Jerry proceeded to train as a helicopter pilot with his first duty assignment being Air Station Detroit in Michigan where he piloted many search and rescue missions over the Great Lakes. Jerry’s career next took him to Mobile, AL, where he held two assignments: one, as a pilot with the Coast Guard Icebreaker Support Section helping to patrol the waters and clear the ice around Alaska and Greenland; the other as a helicopter flight instructor at the Coast Guard’s Aviation Training Center. Jerry later continued his education at Purdue University in Indiana where he received a Master’s Degree in Industrial Administration. Then, in 1976 he was assigned to Coast Guard Headquarters in Washington, DC, for what would be the first of many “desk job” postings. There, he provided administrative and operational support to the service. In 1980, and after achieving the rank of Commander, Jerry was selected to serve as the Executive Officer of Coast Guard Air Station Borinquen on the northwest tip of Puerto Rico. In 1982, Jerry was selected as Commanding Officer for Coast Guard Air Station San Francisco. Jerry returned to Washington in 1984 for what would be a series of assignments during which he would be selected for Captain. He first served in a post in the Personnel Division at Coast Guard Headquarters. In 1986, Jerry graduated from the prestigious Industrial College of the Armed Forces which is now called the Dwight D. Eisenhower School for National Security and Resource Strategy, part of the National Defense University. He then served in the Quality Assurance Division at Coast Guard Headquarters. From 1989 until 1992 Jerry was assigned to the Coast Guard's 8th District Office in New Orleans which oversees operations in the Gulf of Mexico from the panhandle of Florida to the border with Mexico, and the inland waterways of the Mississippi, Ohio, Missouri, and Tennessee River systems. Jerry served first as District Chief for Search and Rescue, and then as Chief of Operations. Jerry’s final assignment was at Headquarters where he focused on implementing quality assurance for Coast Guard programs. Jerry retired from active duty in 1994 after an illustrious career that included many wonderful assignments, adventures and awards. But true retirement would be a dozen years away. Following active duty Jerry worked as a civilian for EG&G and SAIC. In his capacity as a government contractor, he continued to serve his country by providing his expertise to many federal government agencies. In retirement, Jerry lived with his wife, Becky, in Heritage Hunt in Gainesville, VA, where he was an active member of the community. He participated in Retired Men’s Golf, and along with Becky, in Couples Golf. Jerry served as Chairman and Vice Chairman of the Light & Sound TV Committee, providing technical support for community performances, events and security. Jerry enjoyed the many friendships that he and Becky made within the community. Jerry was always active in church, with a membership at the Little River United Church of Christ in Annadale, VA, going back decades. There, Jerry served as Chairman of the Board of Trustees, Member of the Endowment Committee and as a Deacon. Jerry leaves behind the love of his life, his partner and best friend, Becky, with whom he celebrated 57 years of marriage in September 2021.Together at every duty station and in every location where they lived, Jerry and Becky explored, laughed and lived it up - starting an untold number of friendships that have lasted for decades. Jerry was fortunate to be able to travel overseas and throughout the country during retirement with Becky always by his side. They often traveled with - and to visit - the many friends they had made throughout their years together. Perhaps Jerry loved nothing more in life than being a devoted husband, proud father and father-in-law, and an especially proud grandfather. He loved spending time with his grandkids (and the granddogs). Jerry was the loving and steady pillar of strength for the family. He will be deeply loved and profoundly missed, always. A private memorial service will be held by the family in the spring. Interment at Arlington National Cemetery will occur at a future date. In lieu of flowers donations can be made to the U.S. Coast Guard Museum in New London, CT, and the Little River United Church of Christ in Annadale.

The family of Jerry J. Surbey created this Life Tributes page to make it easy to share your memories.

Send flowers to the Surbey family.