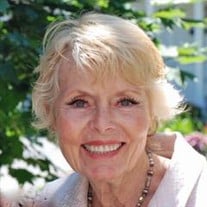 Janice Kay Worth Yost March 25, 1932- December 25, 2021 Janice Kay Worth Yost was born in Winchester, Middlesex, MA, on March 25, 1932, and slipped peacefully into the eternities on Christmas Day 2021, surrounded by her husband of 70 years, children, and grandchildren. In life they were not divided, and in death they will not be separated. She was the oldest of four children born to USAF Colonel Elmer and Alice Worth. Jan was independent and adventuresome, even as a child. At age 12 she took the train alone into Boston to shop and visit museums. She loved dance and drama, starring in local college plays and even hosted a daily radio show called “An Evening with Jan.” She attended several colleges in pursuit of her degree and eventually graduated from the University of Maryland with a Bachelor of Arts in Communications. In 1951, Jan agreed to marry U.S. Coast Guard Academy 1st Class Cadet Paul A. Yost, Jr. He was amazed that she would choose a military life that would take them far from home and around the world. This was the beginning of a beautiful love affair that spanned 70 years and will continue into the eternities. Upon his graduation from the Academy in June 1951 they married and left for Hawaii the next day. When they arrived in Honolulu, Paul offered to help Jan find a broadcasting job but she declined, preferring to be a wife and mother. They never stopped holding hands and together they traversed the world, living in such places as Honolulu, HI, Guam, Concord, CA, Juneau, AK, New Orleans, LA, New York, NY, and Washington, DC. They were an inseparable team. She was Paul’s North Star, and he hers. She managed the home and five children while Paul served our nation, including long stretches at sea, and serving tours in the Korean and Vietnam wars. Jan was by his side as Paul served two U.S. Presidents as the Commandant of the U.S. Coast Guard. She was as comfortable with Presidents as she was teaching children. She had the rare ability to put everyone at ease, and made all who met her want to be their best selves. She epitomized grace, beauty, and style. She loved art, literature, the theater, flowers, tennis, and life in general. She was kind, funny, smart, and easy to talk to. She was well read on a variety of subjects and her children often marveled how she could strike up a conversation with virtually anyone on most any topic. Jan was a wonderful mother and used her theatric talents to read stories to her children and grandchildren, using different voices and sound effects that kept them begging for “just one more chapter.” She excitedly faced each new set of military orders and convinced her children they were going on an adventure. With every frequent move Jan turned a new house into a place of beauty and refuge. Jan always entertained with flair and grace, whether she was hosting a neighborhood dinner club, a group of ambassadors, or a tea party for her grandchildren. Perhaps her greatest talent was seeing the one. Jan had a unique relationship with all five of her children and each of her grandchildren. No one wondered “who was the favorite?” Children, grandchildren, and great grandchildren instinctively knew there were no favorites. She was their Mom, their Nana, their Jannana. She harbored no competition. In 1956, Jan made a momentous decision that would alter her life and affect the future of her family and extended family when she invited a young missionary couple from The Church of Jesus Christ of Latter-day Saints (Church) into her home to teach her the gospel of Jesus Christ. At the time Paul was at sea but upon his return they both decided they should join the Church and remained faithful members throughout their lives. She shared her faith with her extended family, many of whom joined the Church. Jan’s conversion began a lifetime of Christian discipleship. Jan and Paul later took their five young children on an adventure during the Christmas of 1963 to the London Temple, where they were sealed for time and all eternity as a couple and as a family. Jan sent three sons to serve as missionaries, encouraging them not to be afraid to knock on doors and invite others to come unto Christ. After Paul’s retirement, they served a mission of their own as the Church’s Ambassadors to the United Nations. Jan was a woman of great faith who spent her life serving in her congregation and community, wherever she lived. She was a mentor, friend, and an example to women throughout her life, including to her daughters-in-law, young mothers, and military wives. Memory loss marred the last few years of Jan’s life. What emerged with this loss of worldly memory was pure love, and heartbreaking bravery. She faced her days with a radiant smile, found beauty in each person she met, saw the good around her, and Paul was there to help her navigate those challenging waters. Although her mortal frame had weakened in her final years, her spirit continued to radiate Christlike light and love to all around her. While there is sadness in her passing there is no sorrow for Jan, who died in the Lord, Jesus Christ. She is profoundly missed by her husband, children, extended family, and those who knew and loved her. Jan is survived by her loving husband, Paul, their five children: Linda (Mark) Barrand, Chip (Mary Ann), David, Lisa (Peter) Galvin, and Christopher (Michelle), eleven grandchildren, and nineteen great-grandchildren, her brother, Capt. David Worth (Lugene) (USCG Ret.), her sister, Susan Bennion (David), and was preceded in death by her brother, Phillip, and her parents. Funeral services will be held at 9:00 AM on Tuesday, March 29, 2022 at The Church of Jesus Christ of Latter-day Saints, 10000 Stoneybrook Drive, Kensington,. MD 20895. Interment at Arlington National Cemetery at 1:00 PM Tuesday.

The family of Janice Kay Worth Yost created this Life Tributes page to make it easy to share your memories.

Send flowers to the Yost family.