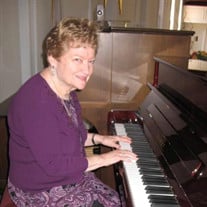 Janice Louise (Bell) Murley On December 5, 2021, Jan Murley, beloved wife of Tom Murley died peacefully at home with Tom at her side after a long courageous battle with dementia. Jan’s life was characterized by her devotion to her family, her strong Christian faith, and her lifelong love of music. Jan was born May 4, 1937 in Darke County, Ohio to James and Mildred Maxine Bell. Jan was the oldest of three children. She graduated from New Madison High School in 1955. Jan eventually worked as a flight attendant for United Air Lines, which led to her meeting First Lieutenant Tom Murley, a United States Marine Corps pilot, in California in 1960. This meeting changed their lives. Jan and Tom were married October 13, 1962. Jan accompanied Tom throughout his military career, including assignments in North and South Carolina, Mississippi, and Virginia. During many of these years, Tom was posted overseas in unaccompanied assignments. In 1972, while still on active duty in the Washington area, Tom and Jan settled in Oakton, Virginia, in the home where they have lived ever since. In Oakton, Jan’s devotion to her family and her faith flourished. She also focused on her lifelong love of music, which had begun with her first piano lessons at the age of 6. Jan continued developing her natural musical talent throughout her life. Jan soon began her career of over forty years as the organist and pianist at the Oakton United Methodist Church, where she quickly became an integral part of the Oakton UMC church staff. In addition to supporting regular rehearsals and church services, she contributed countless hours to discovering and coordinating the appearances of guest musicians. She was best known for her pleasant nature, and her seemingly endless patience, so often demonstrated while tirelessly rehearsing and developing young musicians within the church and community. Jan was pre-deceased by her parents and her brother Jack. She is survived by her husband Tom, her brother Tom (Sharon) of Darke County, Ohio, Tom and Jan’s daughter Camilla (Fernando) Barrientos, Tom and Jan’s son Randall (Heidi Copeland), their granddaughters Raquel Barrientos, Selina (Salvador) Gonzalez, Natalie (Mark) Richards, and Sydney, their grandson Cody, and four great grandchildren, Romeo, Leila, Apollo and Bodie. A Celebration of Life Service for Jan will be held at the Oakton United Methodist Church, 2951 Chain Bridge Road, in Oakton, Virginia at 11 am, Monday, December 20, 2021. This service will be live streamed at oaktonumc.org. Visitation for family and friends will be held Tuesday morning from 8:30-10:00 am at the Pierce Funeral Home, 9609 Center Street, Manassas, Virginia, followed by internment at the Quantico National Cemetery. In lieu of flowers, the family encourages donations in memory of Jan to the Oakton United Methodist Church.

Janice Louise (Bell) Murley On December 5, 2021, Jan Murley, beloved wife of Tom Murley died peacefully at home with Tom at her side after a long courageous battle with dementia. Jan&#8217;s life was characterized by her devotion to her family,... View Obituary & Service Information

The family of Janice Louise Murley created this Life Tributes page to make it easy to share your memories.

Send flowers to the Murley family.