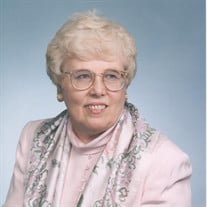 Janet Marian Schechter passed away at home on Thursday, February 3, 2022 at the age of 83 after a long battle with Parkinson's disease. Janet was born on April 8, 1938 in New Jersey to Marian Ward and Robert Rodgers. After high school, Janet worked in New York City at Shell Oil enjoying Broadway shows and shopping in the city especially buying stuffed animals for the daughter she was expecting. Janet loved nice clothes and will be remembered as a classy dresser who lit up a room with her blue eyes and bright smile. Janet was active with the church and made many lifetime friends. There she met her husband and on September 30, 1961 she married Louis Schechter. They raised a daughter Eileen and son Brian. Janet devoted many years to being a loving at home mother of her children including bringing them to Candlewood Lake every day of their childhood summers. She was always there to wrap them in a towel on cold Connecticut mornings after swim lessons. She will be remembered by her children for the many outdoor adventures she joined with the family despite not being an outdoor enthusiast. To her, family was everything, and she poured her love into her mothering. Janet pushed her children to excel at their best and was so proud of their college and career achievements. When her children were older, Janet returned to the workplace ending as an Executive Secretary at BDM before retirement. During those years, she also traveled with Lou to many places including Branson, MO where they enjoyed shows together. For the last sixteen years, Janet and Lou enjoyed the Heritage Hunt retirement community in Gainesville, VA within an hour of her two children and five grandchildren (Ashley, Devin, Evelyn, Emily, and Gregory). Janet was an active line dancer with the "Happy Hoofers" dancing at hospitals and rehab centers. She also loved playing Bunco with the ladies in the neighborhood. Janet continued to love to play games with the family even after her Parkinson's diagnosis limited her mobility. She was an avid reader and puzzle enthusiast. In her last years, Janet faced much adversity with Parkinson's, and there really is no other word to describe Janet other than a warrior. She did not complain and even at the end was more worried about others than herself. Janet is survived by her husband of 60 years, the love of her life, and her daughter Eileen Scordy and son-in-law David Scordy of Hamilton, VA and son Brian Schechter and daughter-in-law Cathy Schechter of Leesburg, VA and grandchildren (Ashley, Devin, Emily and Greg Schechter). She is also survived by one brother Jim Rodgers residing in Dumont, NJ. Janet will be cremated and a private family celebration of life will be held.

Janet Marian Schechter passed away at home on Thursday, February 3, 2022 at the age of 83 after a long battle with Parkinson's disease. Janet was born on April 8, 1938 in New Jersey to Marian Ward and Robert Rodgers. After high school, Janet... View Obituary & Service Information

The family of Janet Marian Schechter created this Life Tributes page to make it easy to share your memories.

Janet Marian Schechter passed away at home on Thursday, February...

Send flowers to the Schechter family.